Luke 11:1 Once Jesus was praying in a certain place. When he stopped praying, one of his disciples said to him, “Lord, teach us to pray as John taught his disciples.” 2Jesus told them, “When you pray, say this: Father, let your name be kept holy. Let your kingdom come. 3Give us our bread day by day. 4Forgive us as we forgive everyone else. Don’t allow us to be tempted.”

This prayer is recited by congregations of believers all over the world in every language.

It’s so beautiful that we share this prayer across the world.  For some, reciting the Lord’s prayer is sharing a moment across time, space, and culture, where we’re all together as one body.

The Power of Prayer

Jesus goes on to talk about the power of prayer, which you can also read in Matthew 7:7-11

Luke 11:5 Jesus said to his disciples, “Suppose one of you has a friend. Suppose you go to him at midnight and say, ‘Friend, let me borrow three loaves of bread. 6A friend of mine on a trip has dropped in on me, and I don’t have anything to serve him.’ 7Your friend might answer you from inside his house, ‘Don’t bother me! The door is already locked, and my children are in bed. I can’t get up to give you anything.’ 8I can guarantee that although he doesn’t want to get up to give you anything, he will get up and give you whatever you need because he is your friend and because you were so bold.
9“So I tell you to ask, and you will receive. Search, and you will find. Knock, and the door will be opened for you. 10Everyone who asks will receive. The one who searches will find, and for the person who knocks, the door will be opened.
11“If your child asks you, his father, for a fish, would you give him a snake instead? 12Or if your child asks you for an egg, would you give him a scorpion?
13Even though you’re evil, you know how to give good gifts to your children. So how much more will your Father in heaven give the Holy Spirit to those who ask him?”

Be bold and ask God for whatever you need.  And he will provide it.  Specifically, if you ask God to fill you with the Holy Spirit, you can be assured that God’s going to become a part of your life, which will become supernaturally empowered.

This is typically how the Lord’s prayer is prayed in churches across the world.  This comes from Matthew 6:9-13 I’ve replaced the thees and thous from the traditional version from the King James Bible.  Note that modern Bibles have taken out some words because they’re absent from some really ancient manuscripts, although they’re quoted in even more ancient commentaries.

We can pray this together:

Our Father who is in Heaven,
May your name be kept holy.
Your kingdom come,
your will be done
on Earth as it is in Heaven.
Give us today our daily bread,
And forgive our sins,
As we forgive each of those
who sin against us.
Lead us from temptation,
And deliver us from evil.
For yours is the kingdom,
the power, and the glory.
Forever.  Amen.

I’d like to break this down to reveal a pattern that we can use for prayer.

Our Father who is in Heaven, may your name be kept holy

The Lord’s prayer starts with a focus on God as our benevolent father.  But he’s also the infinite creator of the universe and worthy of infinite glory and respect.  By recognizing this, we shift our focus and put our relationship in context.  We are sons and daughters of the infinite God.

Tell God about the amazing things he’s done.  Thank him for them.

Proverbs 3:6 “In all your ways acknowledge him, and he will make your paths smooth”

This is why the Lord’s prayer starts with acknowledging his almightlyness and our precious relationship with him as his sons and daughters.

Your kingdom come; your will be done on Earth as it is in Heaven

How can I help God’s kingdom come?  What have I seen others doing that promotes his kingdom?  Give them a shout out to God and be excited about this.

Before Jesus went back to Heaven, he said,

Matthew 28:19 So wherever you go, make disciples of all nations: Baptize them in the name of the Father, and of the Son, and of the Holy Spirit. 20Teach them to do everything I have commanded you.
“And remember that I am always with you until the end of time.”

Often, it’s the simple, mundane things that we do that help bring about God’s Kingdom.  Caring for others and taking the time to allow God’s love to flow through you.  Our goal should be to teach others to teach others godliness – making disciples who make disciples.

Give us today our daily bread

Now that we’ve put our prayer in context and have shifted our focus towards serving God and others, we’re in the right mindset to tell God what we need – to live and to fulfil our job in making disciples.  What do I/we need?  List your needs to God.  Some people have a prayer list or people and circumstances they present to God.  This helps them to focus on what to pray for.  I’m more random and pray about whatever comes to mind, believing that God’s Holy Spirit is prompting me for the things I should pray about.

Philippians 4:6 Never worry about anything.  But in every situation let God know what you need in prayers and requests while giving thanks.”

Matthew 18:21 Then Peter came to Jesus and asked him, “Lord, how often do I have to forgive a believer who wrongs me? Seven times?”
22Jesus answered him, “I tell you, not just seven times, but seventy times seven.
23“That is why the kingdom of heaven is like a king who wanted to settle accounts with his servants. 24When he began to do this, a servant who owed him millions of dollars was brought to him. 25Because he could not pay off the debt, the master ordered him, his wife, his children, and all that he had to be sold to pay off the account. 26Then the servant fell at his master’s feet and said, ‘Be patient with me, and I will repay everything!’
27“The master felt sorry for his servant, freed him, and canceled his debt. 28But when that servant went away, he found a servant who owed him hundreds of dollars. He grabbed the servant he found and began to choke him. ‘Pay what you owe!’ he said.
29“Then that other servant fell at his feet and begged him, ‘Be patient with me, and I will repay you.’ 30But he refused. Instead, he turned away and had that servant put into prison until he would repay what he owed.
31“The other servants who worked with him saw what had happened and felt very sad. They told their master the whole story.
32“Then his master sent for him and said to him, ‘You evil servant! I canceled your entire debt, because you begged me. 33Shouldn’t you have treated the other servant as mercifully as I treated you?’
34“His master was so angry that he handed him over to the torturers until he would repay everything that he owed. 35That is what my Father in heaven will do to you if each of you does not sincerely forgive other believers.”

So, if I don’t forgive, I won’t be forgiven – that’s pretty heavy.

Lead us from temptation and deliver us from evil.

God, show me the way out of temptation that you’ve already provided.  Think about the temptations you face.  Ask God to show you the way he’s already provided to be able to avoid these. Allow God to give you thoughts about these.  And make sure you follow up on what God is telling you.

1 Corinthians 10:13 There isn’t any temptation that you have experienced which is unusual for humans. God, who faithfully keeps his promises, will not allow you to be tempted beyond your power to resist. But when you are tempted, he will also give you the ability to endure the temptation as your way of escape.

This is so reassuring.  It’s also rather disturbing that every time I sin, it’s because I’ve refused to take the way of escape that God’s provided, so I’m without excuse.  But God doesn’t condemn us for this but is patiently training us to do better next time.

For yours is the kingdom the power, and the glory.  Forever

This is why we honor and pray to God.  This beautifully sandwiches our prayer in acknowledging God and his sovereignty over our lives.

Revelation 4:11 “Our Lord and God, you deserve to receive glory, honor, and power because you created everything. Everything came into existence and was created because of your will.”

This Hebrew word means “Let it be so”.  As a noun, it means faithfulness and loyalty.  Curiously, we often use it to say, “I’m signing off now”.  But we should always be talking with God.

1 Thessalonians 5:16 Always be joyful. 17Never stop praying. 18Be thankful in all circumstances, for this is God’s will for you who belong to Christ Jesus. 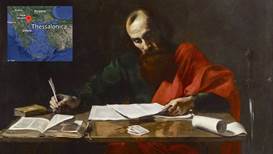 I love Cliff Richard’s Millennium Prayer, which I often use when leading worship.  He sets the words of the Lord’s prayer to the melody of Auld Lang Syne, which is sung after midnight to welcome in the new year.

I pray you’ll be amazingly blessed as you spend time talking with God and developing a personal relationship with the infinite God, who has adopted us as his children.