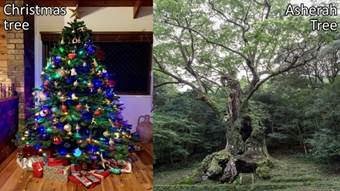 Christmas includes many godly traditions, which have been blurred and mixed with paganism and commercialism.  Some claim that Christmas trees follow the pagan practice of Asherah trees.  Various cultures have a sacred tree, which shelters an idol, which they worship.  This connects with nature-worship, where it would be blasphemous to use a dead or a fake tree.

There’s records of Christians celebrating Christmas on the 25th of December from 202AD.  By 274AD, this was becoming so popular that the Roman emperor shifted the pagan celebration of Sol Invictus to that date. Although unlikely, this is calculated by prophetic convention that a prophet dies on the day of their conception – the 25th of December is 9 months before Jesus’ death.
There’s also a tradition which calls the Jewish festival of Hanukkah second tabernacles.  This celebrates when God will come to live among people and reign over the world.

Santa Claus derives from St. Nicolas from around Turkey around 400AD.  He was a particularly generous priest, who secretly gifted some poor girls the money they needed to get married.
Gifts derive from St Nicolas and the Magi.  South Americans celebrate three kings’ day rather than Christmas, and in south Germany it’s the Christ-child who brings gifts.

Sometimes people write xmas instead of Christmas because it’s shorter.  It also reminds us of the cross.
In ancient Greek religious pictures, called icons, they would often just write X instead of Jesus.  This is an abbreviation of Χρίστος or Christ, which starts with the Greek letter Chi, which is pronounced like the ch in Bach or Loch Ness, which is more like a harsh H.
The suffix, -mas derives from ancient Latin christianese for mission.  So, Xmas literally means Christ's mission