Christmas for dummies
The angel appears to Joseph 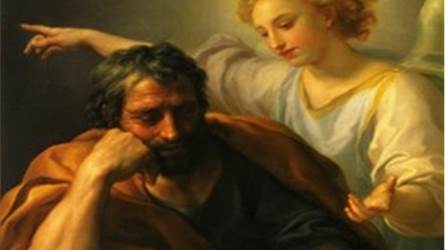 Matthew 1:18 Now the birth of Jesus Christ happened like this. When his mother Mary was engaged to Joseph, before they came together, she became pregnant by the Holy Spirit.  19Then Joseph her husband, being a just man, and not wanting to make her a public example, was considering breaking up quietly.a
20But while he thought about this, the angel of the Lord appeared to him in a dream, saying, “Joseph, you descendant of David, don’t be afraid to take Mary to be your wife.  Because what is conceived in her is of the Holy Spirit.  21And she’ll have a son, and you’ll call him Jesus.  Because he’ll save his people from their sins.”  22Now all this was done, to fulfill what the Lord said by the prophet, saying,  23“Look, ba virgin will become pregnant, and give birth to a son, and they’ll call him Emmanuel, which being interpreted is, ‘God with us.’”
24Then when Joseph woke up, he did as the angel of the Lord had invited him and took to him his wife.  25But they didn’t have sex until she gave birth to her firstborn son.c  And he was named Jesus.

Deuteronomy 24:1 When a man has taken a wife, and married her, and she displeases him, because he has found her to be unfaithful, then let him write her a bill of divorce, and give it in her hand, and send her away from his house.

Isaiah 7:14 Therefore the Lord himself will give you a sign: A virgin will become pregnant, and give birth to a son, and call his name Immanuel.

This disproves the theory that Mary remained a virgin.