Christmas for dummies
The infants are slaughtered by Herod 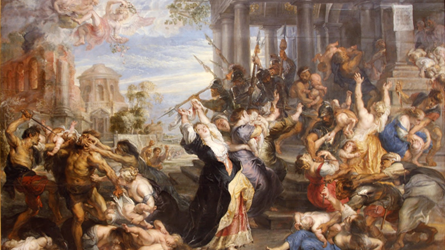 Matthew 2:16 Then when Herod saw that he’d been duped by the wise men, he was absolutely furious.  He sent soldiers to slaughter all the children that were in Bethlehem, and the surrounding area, aged two years and under, according to the precise time he’d learned from the wise men.  17This fulfilled what Jeremiah the prophet spoke of, saying, 18“A voice was heard in Rama,a wailing, and weeping, and great mourning, Rachel weeping for her children, and refusing to be comforted, because they’re dead.”

Jeremiah 31:15 The Lord declares, “A voice was heard in Ramah, grieving, and weeping bitterly.  Rachel is mourning for her children and refusing to be comforted, because they are dead.”

This shows how horrific the Roman occupation was, and their thirst for, and brutality in maintaining power.  This is why Israel so looked forward to the Messiah and painted a fantastic picture of how he would overthrow this regime.  You can begin to understand why they demanded Jesus be killed when he refused to be the guy to promote these religious dudes to be the new oppressive overlords of the Earth.
Most pretty Christmas pageants skip over this delicate part of the story and focus on nice things like Christmas trees and glittering lights.