Christmas for dummies
The angel appears to Mary 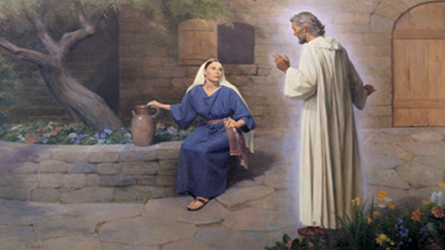 Luke 1:26 In the sixth month, God sent the angel Gabriel to a city of Nazareth in Galilee, 27to a virgin called Mary, who was engaged to a man called Joseph, a descendant of David.  28The angel came to her and said, “Greetings, you who are highly favored, the Lord is with you.  You are blessed among women.”
29When she saw him, she was troubled with his words, and wondered about this strange greeting.  30The angel said to her, “Don’t be afraid, Mary, for you’ve found favor with God.  31Look, you’ll become pregnant, and give birth to a son, and call him Jesus.  32He’ll be great and be called the Son of the Highest.  And the Lord God will give him the throne of his father David.a  33And he’ll reign over the house of Jacob forever, and his kingdom will never end.”  34Then Mary said to the angel, “How is this possible, since I’ve never had sex?”  35And the angel answered her, “The Holy Spirit will come upon you, and the power of the Highest will overshadow you.  Therefore, the holy one which you will give birth to will be called the Son of God.  36Look, your cousin Elizabeth, who is old and couldn’t have children, is pregnant with a son in her sixth month.b  37For with God nothing is impossible.”  38And Mary said, “Look at the Lord’s servant.  Let it be as you said.” And the angel went away.

Jeremiah 23:5 The Lord declares, “The days will come, that I will raise to David a righteous Branch, and a King will reign and prosper, and will execute judgment and justice in the earth.

Genesis 18:14 Is anything too hard for the Lord? At the appointed time, I will return to you, according to the duration of pregnancy, and Sarah will have a son.