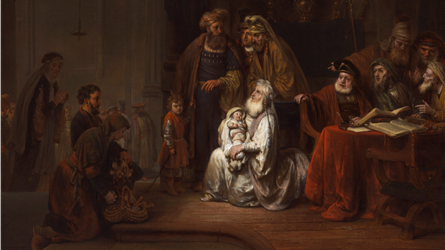 Luke 2:25 And, look, there was a man in Jerusalem, whose name was Simeon.  He was just and devout, waiting for the one who would comfort Israel, and the Holy Spirit was on him.  26And the Holy Spirit had revealed to him, that he wouldn’t die, before he saw the Lord's Christ.  27And the Spirit led him into the temple when the parents brought in the child Jesus, to fulfill the custom of the law for him.  28Then he took him up in his arms, and blessed God, and said, 29“Lord, now you can let your servant depart in peace, according to your word.  30For my eyes have seen your salvation, 31which you’ve prepared in front of all people, 32a light to shine on all people,a and the glory of your people Israel.  33And Joseph and his mother were amazed at the things that were spoken of him.  34And Simeon blessed them, and said to Mary his mother, “Look, this child is destined to cause the falling and rising again of many in Israel, and to be a sign which shall be spoken against.  35So, the thoughts of many hearts may be revealed, even a sword will pierce through your own soul.

Isaiah 49:6 And he said, “It’s an easy thing for you to be my servant to raise up the tribes of Jacob, and to restore the preserved of Israel.  You will also be my gift as a light to the nations, that you may save people to the end of the world.”