Introduction to Christianity with Luke
Chapter 19 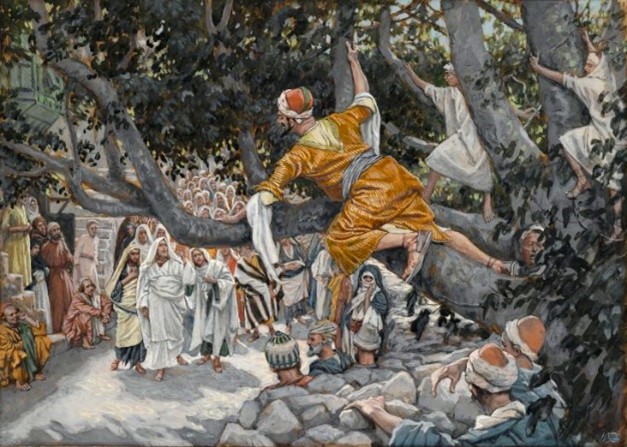 Tax collectors were the most despised in Jesus’ society.  During World War 2, the Judenrat (Jewish council) collaborated with the gestapo against their people.  The Kapo were Jewish prisoners who supervised forced labor in return for privileges.  Around Jesus time, tax collectors worked for the Roman occupation.  They would overcharge and pocket the difference.  They paid for friends – prostitutes and partying riffraff who had no reputation worth protecting.

This is why the crowd disapproved of Jesus wanting to be Zacchaeus’ guest.  However, this act of love unconditional melted Zacchaeus’ heart, leading to a great example of repentance.

Romans 5:8 Christ died for us while we were still sinners. This demonstrates God’s love for us.

Zacchaeus didn’t just stop his wicked behavior, but he repaid those he’d wronged with 400% interest.  James 2:14-26 talks about how actions prove our faith.  Zacchaeus’ belief in Jesus and receipt of forgiveness immediately overflowed to a desire to make things right towards those he’d wronged. 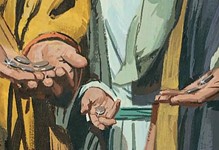 The Jews were hyped up about prophecies of their Messiah who would come to rule the world from Jerusalem.  Their leaders expected to rule the world at his side after he overthrew the oppression of other nations.  Many “Christians” hold a similar attitude today – that Jesus will rapture them out of this world while he brings on the apocalypse, then return with them to rule the Earth for 1,000 years.

Jesus is that prince that the Jews despised, who has gone to Heaven for this coronation.  He’s also despised by “Christians” who desire power and comfort.  Jesus has given each of us a life, which he expects us to invest to make disciples for his kingdom.  When he returns, we will be rewarded according to the results of our investment.  But those who have buried their investment will be punished with all the other wicked people who hated the King.

When I read about at least putting the money into the bank, I relate this to volunteering at church, e.g., in the choir.  While this isn’t directly making disciples, it helps those that do.

Around 530BC, the prophet Zechariah wrote: 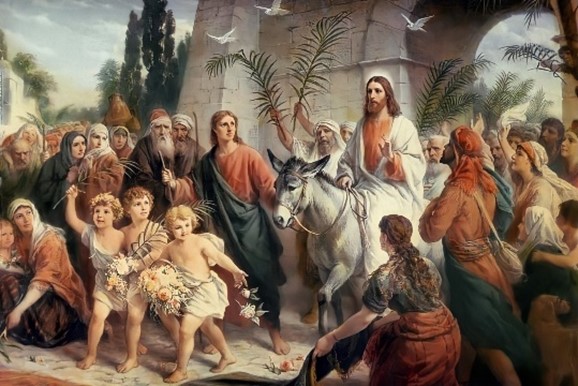 Zechariah 9:9 Rejoice with all your heart, people of Zion!  Shout in triumph, people of Jerusalem!  Look!  Your King is coming to you: He is righteous and victorious.  He is humble and rides on a donkey, on a colt, a young pack animal.

10He will make sure there are no chariots in Ephraim or war horses in Jerusalem.  There will be no battle bows.  He will announce peace to the nations.  He will rule from sea to sea and from the [Euphrates] River to the ends of the earth.

Prophecy is like describing distant mountain peaks in time.  It’s hard to distinguish the distance between them.  Often prophecies cover periods, which can be thousands of years apart.  Jesus has metaphorically fulfilled verse 10 onwards with Christianity bringing great peace throughout the world, but many prophecies point to a literal fulfilment of these verses.

The people were excited at the coming fulfilment of the Pharisees’ biased interpretation of these prophecies.  Those who felt oppressed by the Pharisees’ strict traditions looked forward to the restoration the coming Messiah would bring.

This event is known as Palm Sunday.  As a kid, I have fond memories of this story.  I can vividly imagine enacting this:  We’d all make a path down the aisle of the church with palm leaves and clothes and praise God as the preacher rides to the stage on someone acting the ass on all fours.  It’d be hilarious, but very exciting and memorable. 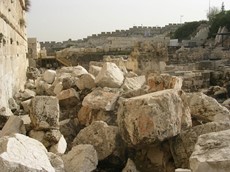 Jesus knew the prophecies, and more.  He knew Jerusalem would be overthrown because of their rejection of the Messiah.

In 70AD, when the Romans conquered Jerusalem, despite orders to save the temple, there was a fire.  It melted the gold, so they had to tear apart the stones and plough the entire site to get to the gold.  The stones from the temple are still lying there today. 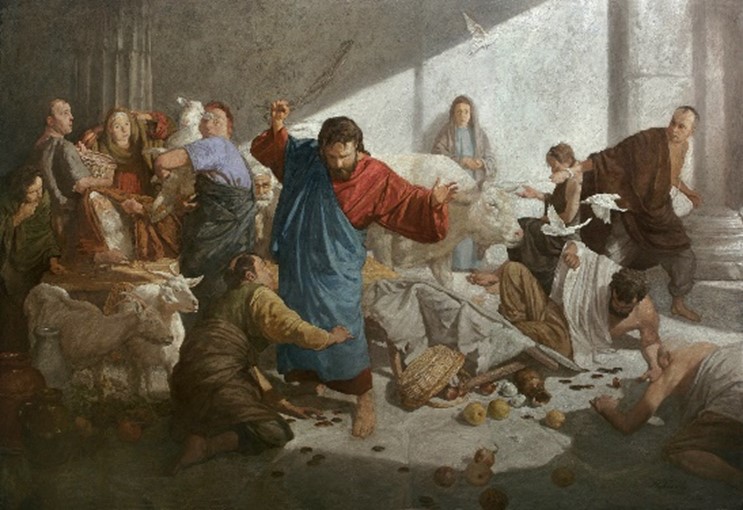 Pilgrims would travel from distant cities and countries to worship at the temple.  They’d bring money to purchase animals to sacrifice.

Many foreigners would also come to worship God, but they were only allowed in the outer areas.  That’s where they set up a market.  Merchants profiteered with exorbitant prices and exchange rates.  I can imagine Jesus seeing this every time he was at the temple.  Now was the time to do something about this.

Jesus was crucified at the upcoming Passover festival.  Before this, the Jews were required to get rid of any yeast in their houses, which relates to the tradition of spring cleaning.  Yeast represents sin in our lives.  So, Jesus was cleaning his father’s house.

Sometimes, visiting preachers set up a table so that people can buy their resources to sponsor their ministry.  This is a good thing, just like having a market to provide travellers with animals to sacrifice.  But it becomes a bad thing with profiteering or when it gets in the way of people worshipping and ministering to each other at church.