Introduction to Christianity with Luke
Chapter 7

Hi, welcome to my Introduction to Christianity with Luke. I’m Brent Clark. In chapter seven, we learn about: 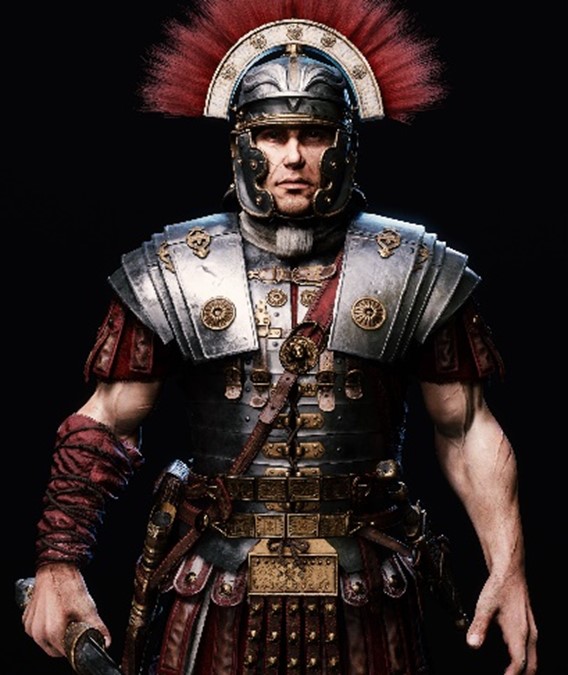 I love this story.  It shows how Jesus’ authority is not limited by distance.  Usually when we pray for healing, we gently place our hands on the area, or if that would be inappropriate, on their shoulders or head, or hold their hand.  There seems to be a greater connection when praying in this way.  However, God’s power is not limited by this.

Many great evangelists would have huge meetings where people would come up on stage to be healed.  When accusations came of practicing medicine without a license, they remembered this story and took the option of speaking healing while people were still in their seats.  When TV preachers pray for healing, they encourage people to touch the screen for a point of contact.  This is useful psychologically, but the wonderful reality is that God’s power is unlimited.  Some talk about his power being carried on the airways, but actually, since the Holy Spirit is everywhere, God’s power is available everywhere.  A touch is just a psychological aid.

This centurion understood authority.  He could dictate a command, which would be carried out, even far away from him. 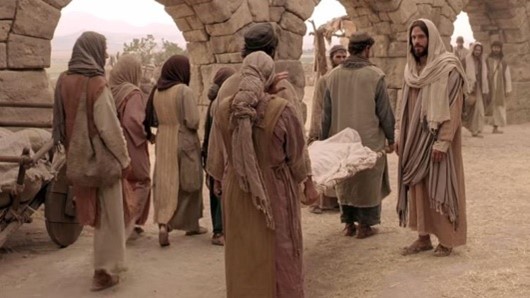 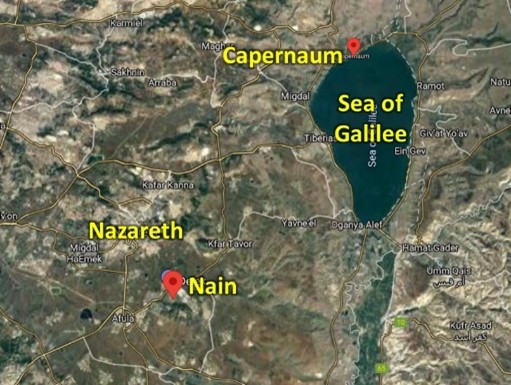 What a way to crash and ruin a perfectly good funeral!  But nobody seemed to mind ;-).  Such a miracle is only legendary – similarly today.  I personally know of miraculous healings, but only hear remote stories of dead people coming back to life – often from missionaries.  For the witnesses of this event, it was something that the prophets Elijah and Elisha did 700 years ago, but otherwise unheard of.  This event proved that Jesus was a great prophet.

John the Baptist even heard of this from prison and sent his friends to confirm these stories.  This seems weird because John was Jesus’ relative.  This suggests that John struggled to believe what was happening, perhaps because of his own situation.  Instead of saying “yes”, Jesus performs a bunch of miracles that fulfill John’s expectations of the Messiah from ancient prophecies and tells John’s disciples to report on what they’ve witnessed. 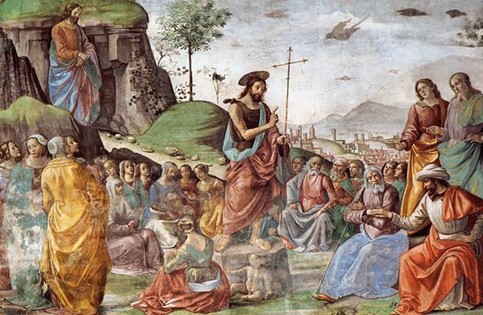 With the prosperity gospel of the Pharisees, the people might have wondered why God was punishing John with imprisonment.  “Was he a charlatan?”  Jesus reminds them why they came out to see him and be baptized by him.  He shows that John was fulfilling

Malachi 3:1“I’m going to send my messenger, and he will clear the way ahead of me. Then the Lord you are looking for will suddenly come to his temple. The messenger of the promise  will come. He is the one you want,” says the Lord of Armies.

Meanwhile the religious dudes were blinded by their worship of power and their preconceived theological theories, that they failed to see the obvious power of God at work.

This seems similar to Matthew 26:6, Mark 14:3.  John 11:2 says that this woman was Mary, the sister of Lazarus, whom Jesus raised from the dead.  All three stories are at Simon’s house.  Luke’s is Simon the Pharisee, whereas Matthew and Mark speak of Simon the Leper. Simon the Pharisee could have had Leprosy, but the details of the story are very different.  In Luke’s story, Simon is disturbed at Jesus allowing a sinful woman to touch her, whereas the other two have the disciples complaining about the waste of money.  Remember that they weren’t so inventive with names back then, and Simon was a particularly popular name, deriving from Israel’s son Simeon.

In this story, Jesus shows how her actions prove a personal encounter with God’s unconditional forgiveness.  In response, Jesus declares “Your sins have been forgiven” and “Your faith has saved you.” 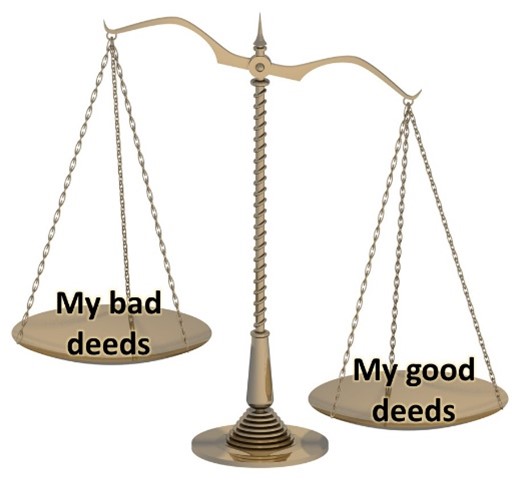 Human intuition expects that you get into Heaven by being good enough. If you just do the right things, then God will admit you to eternal paradise. On the other hand, if you’ve been bad, you’ll go to Hell. This was the dominant attitude of the pharisees and is common across religions today.

However, Christianity teaches that no one is good enough.

Romans 3 :22 Everyone who believes has God’s approval through faith in Jesus Christ. There is no difference between people. 23Because all people have sinned, they have fallen short of God’s glory. 24They receive God’s approval freely by an act of his kindness [or “grace.”] through the price Christ Jesus paid to set us free [from sin]. 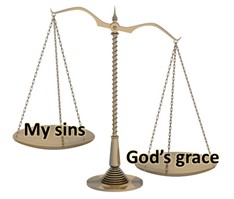 So, we’ve all sinned and fall short of God’s requirement of perfection. This is great because it puts us all on an even footing, and no one can boast of their own perfection, although many try. However, it means we’re all worthy of the eternal torture of Hell. But God doesn’t like this one bit. He created us to be his children. We reject him because we want to do life our own way. It’s against our nature to admit we’re wrong and imperfect, and that we need help. This is a big problem for God. We can’t fix it because we can’t undo the wrong we’ve done. So, God did – by sending his son Jesus to live a perfect life, but to take the death penalty for sin on our behalf.

John 3 :16 God loved the world so much that he gave his only son, so that whoever believes in him need not perish [in Hell], but will have eternal life [in Heaven].

The centurion believed. And Jesus recognized his faith. So did John the Baptist – even if he needed a reminder. The woman who’d lived a sinful life believed and expressed this by ministering to Jesus’ feet.

From the forgiveness, which that woman experienced, she poured out all her gratitude onto Jesus’ feet. And Jesus said that this expression proved that her many sins had been forgiven. 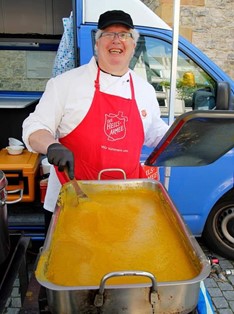 Different churches express their faith in different ways. Their understanding of the bible influences this, but they also have their own personalities with various quirks – just like you and me. Some express their faith in caring for the poor, like my friend here from the German Salvation Army who regularly cooks food for the homeless. Others express faith through beautiful or exuberant expressions of worship, and others through teaching or combatting social injustices. Most express their faith in a multitude of different ways. However, we also have a tendency to get caught up in just doing stuff. What was once a wonderful godly thing becomes a rigid tradition that replaces God. This is the danger of traditions, which the pharisees fell for and it became an idol they worshipped. 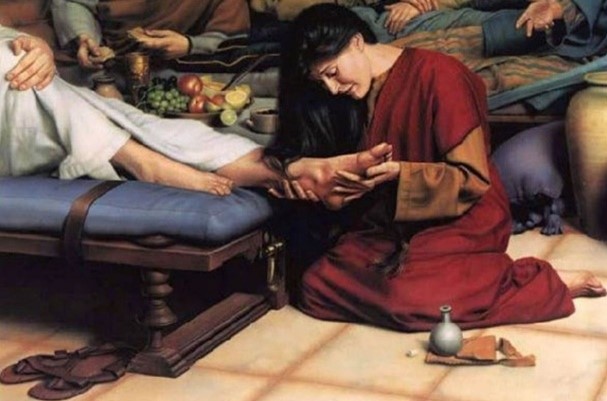 Why do I write these books and produce these videos? I don’t get paid for it, in fact, I’ve given up a day a week from earning money to have time for this. I don’t have a following – only a couple of people look at my videos each week. It certainly doesn’t seem worth the hours I pour into this. This is how I express my faith and love for God. Like the dubious woman at Simon’s house, I pour out this expression of love for Jesus like a costly perfume. In other’s eyes this is a complete waste that could be better spent serving the poor or something. But this is what faith looks like: knowing that everything that I do will be used by God. Now, or in the distant future – whether it’s recognized by others or not. I won’t know the impact my work has until Jesus crowns me in Heaven. But that’s not why I do this. It’s just about expressing my love for him. Because I believe. Because I have faith.

James 2 :17 In the same way, faith by itself is dead if it doesn’t cause you to do any good things. 18Another person might say, “You have faith, but I do good things.” Show me your faith apart from the good things you do. I will show you my faith by the good things I do. 19You believe that there is one God. That’s fine! The demons also believe that, and they tremble with fear.

So true faith or belief expresses itself through our actions.

Hey God, I thank you for being with us through this chapter. Thank you that you are showing us all about faith and the wonderful works that you have done when you were here on Earth, Jesus, and also the things that you do today. Thank you that you forgive us, and through that forgiveness, we express that through things that we do. And Lord I pray that you’ll bless each person who reads this. Help them to grow closer to you. I pray in Jesus name. Amen.