Why I believe the Bible is true
Evolutionism violates scientific law

Science establishes laws that predict behaviour and set bounds for plausible scientific hypotheses.  While evolutionism is the go-to explanation of our origins, “agreed to by the majority of scientists”, the fact of their agreement is unconvincing as long as the foundation is faulty.

Since the recent Christchurch earthquakes, 80% of our central business district is being rebuilt.  While only a few buildings were obviously broken in the September quake, the ensuing February quake revealed the resulting weaknesses of other buildings.  Most buildings looked ok except some cosmetic cracking, but careful examination of their foundations and structure demanded their replacement.  We’d built our city on sandy ground, fooling ourselves that our foundations would cope.  The multi-million-dollar royal commission concluded, “The ground shook too much”.

We can learn from this that you can shake something too much – such that even the most elaborate structures built on sand will fail.  Creation shakes the foundation of evolutionism.  And if we build our theology on evolutionism its collapse will lead to the destruction of many people.

Evolution contradicts the biological law that life only comes from life according to its own kind.

https://en.wikipedia.org/ wiki/ Abiogenesis describes the “science” of describing how life arose from non-life.

As a software engineer, I can best appreciate information/computer code - such as DNA. Code requires a machine to execute it, but modern machines need code to create them - to augment our intelligence. The cell provides the machinery to read DNA, but the DNA defines how to build the cell. The complexity implied by this relationship strongly contradicts the entropic forces we observe destroying such complexity. At every conceivable step from the big bang to humans, we encounter such contradictions.

All things tend to disorder

This law of nature is no better demonstrated than in a teenager’s bedroom.  The second law of thermodynamics applies this to heat https://en.wikipedia.org/ wiki/ Second_law_of_thermodynamics -that in a closed system variance in temperature will eventually even out.

Evolutionism asserts that things coincidentally improve over time.  Mutations eventually lead to improvements.  The reality is that mutations disappear within a few generations.  Inbreeding (tight natural selection) leads to deformations and less survivability.  A group of pet cats left for a few generations lose specific breed’s traits to converge to similar mongrels.

Without effort and discipline, our theology is equally liable to corruption from ungodly influences.

The Miller-Urey experiment attempts to synthesize the formation of amino acids from a primordial soup.

This experiment has only produced disproof e.g. creating 50/50 left vs. right-handed molecules - not 100% left as observed in life.  The amino acids must be immediately extracted from their formative environment, so they are not destroyed.

At every turn, evolutionism is rapidly destined to its undoing.

For simpler math, let's increase the number of planets by the factor of 1 million to 1e30.

We really can't calculate such astronomical amounts, so let's just drop a 0 as that's nothing ;-)

The myth of the simple cell

Charles Darwin perceived a simple cell being a blob of goo.

We now know the “simple cell” encompasses a complexity comparable to a metropolis - with food production, waste disposal and logistics to the max. At its core is a command centre to govern all of its activities. A fundamental feature thereof is our DNA - a computer program, which is beyond modern comprehension. The nano-machinery of the cell reads this code to perform all of its functions, including the reproduction of that code. This is a chicken and egg scenario. This complexity implies an intelligence beyond our own. Evolution contradicts scientific laws to claim that this just fell together. 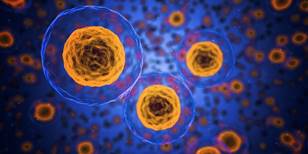