Why I believe the Bible is true
The fall

While creation explains our physical origins, the fall describes the origin of our corrupt nature, death and suffering.  This is fundamental to understanding our world and of the gospel.  To allegorize this is to say we’ve not inherited a sinful nature that only Christ can redeem.  This narrative explains why the world is so messed up.  Trying to fix the world while disregarding the root problem is just plastering over the symptoms.

We can all relate to this story.  Adam and Eve’s guilt identifies with our own – as do their consequences. But we also experience God’s provision, even in our guilt.

Genesis 3:1 Now the snake was more crafty than any of the wild animals the Lord God had made. He said to the woman, ‘Did God really say, “You must not eat from any tree in the garden”?’
2The woman said to the snake, ‘We may eat fruit from the trees in the garden, 3but God did say, “You must not eat fruit from the tree that is in the middle of the garden, and you must not touch it, or you will die.”’
4‘You will not certainly die,’ the snake said to the woman. 5‘For God knows that when you eat from it your eyes will be opened, and you will be like God, knowing good and evil.’

The whole idea of questioning the historicity of the Bible is like Satan planting doubts by asking “did God really say that?”.  This is the first trick in the book – to cast doubts on God’s integrity.  Before you’ve had a chance to formulate a godly response, he’ll plant a desire to try that forbidden fruit, promising that you’ll gain wisdom and knowledge and that exploring such doubts will not lead to certain death.  True, God won’t strike you down the moment you explore doubts, but if you feed on them, those doubts will lead you to your destruction.  The best lies are those packaged in truth.

7Then the eyes of both of them were opened, and they realised that they were naked; so they sewed fig leaves together and made coverings for themselves.

Immediately they recognized their exposure.  It is human nature to cover up our guilty conscience – with whatever flimsy material might be at hand.  This is the exact response we’ve all practiced – hiding those dirty hands, covering up our sexual exposure, closing that book, minimizing that browser.

8Then the man and his wife heard the sound of the Lord God as he was walking in the garden in the cool of the day, and they hid from the Lord God among the trees of the garden.

The guilt of our sin causes us to hide from God in fear of punishment or disappointing him – like a kid who knows that they’ve been naughty.

9But the Lord God called to the man, ‘Where are you?’

This summarizes the Bible: God is seeking us.  It’s not like he didn’t know where Adam was. He could have jumped them behind the bush and boomed in a thunderous voice and with lightning in his fists.  But rather, he gently called out to Adam, playing as if he didn’t know – to give him the opportunity to come clean.

10He answered, ‘I heard you in the garden, and I was afraid because I was naked; so I hid.’ 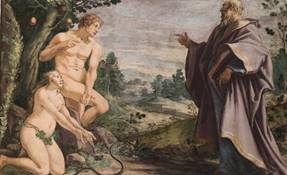 11And he said, ‘Who told you that you were naked? Have you eaten from the tree from which I commanded you not to eat?’
12The man said, ‘The woman you put here with me – she gave me some fruit from the tree, and I ate it.’

Yup – done that too – passing the blame or at least sharing it instead of facing up to the fact that I faulted.  I remember a few times that I dobbed in my friends who were complicit in the mischief I led them in.

13Then the Lord God said to the woman, ‘What is this you have done?’
The woman said, ‘The snake deceived me, and I ate.’

Then God cursed the snake, so he would no longer have a leg to stand on. And he prophesies

15And I will put enmity between you and the woman, and between your offspring and hers; he will crush your head, and you will strike his heel.’

Right in our guilt, God declares his solution: Her offspring (not his) would crush the powers of evil even as they strike (pierce) his heel on the cross.  Apparently, we inherit our sinful nature from our fathers, which is why the virgin birth is so important.  Genetically, this implies that fathers carry the sin gene, which renders us incapable of not sinning.  Jesus was conceived of God in Mary to produce a child capable of not sinning.  I so look forward to our resurrected bodies that will also be capable of not sinning – as God created Adam and the angels.

17 … ‘Cursed is the ground because of you; through painful toil you will eat food from it all the days of your life.
18It will produce thorns and thistles for you, and you will eat the plants of the field.
19By the sweat of your brow you will eat your food until you return to the ground, since from it you were taken; for dust you are and to dust you will return.’

Until now sin had no foothold on the earth.  Satan had to trick earth’s authorities, Adam and Eve, to relinquish authority that he could have his way.

This explains the natural law, that our lives are filled with difficulties

John 16:33 ‘I have told you these things, so that in me you may have peace. In this world you will have trouble. But take heart! I have overcome the world.’

If this is not history, then the Gospel is meaningless:

Romans 5:12 Therefore, just as sin entered the world through one man, and death through sin, and in this way death came to all people, because all sinned

Genesis 3:21 The Lord God made garments of skin for Adam and his wife and clothed them.

Even in our guilt and shame, God provides for us.  God did not obliterate our sin in that moment.  Learning to live with the consequences of our actions encourages us to avoid poor choices.  But God provides the means to cover our shame so that we may appear before him.

But wait, there’s more.  Where did the skin come from? It wasn’t until Noah that eating meat was permitted.  I read into this that God performed the first sacrifice on that day, deferring Adam and Eve’s death to presumably a lamb.  This is echoed with Abraham’s (near-) sacrifice of Isaac, which is ultimately fulfilled with Jesus.

Note that Adam’s son, Abel sacrificed lambs in memorial of this and in prophecy of Jesus’ sacrifice.  I expect he learned this from his dad. 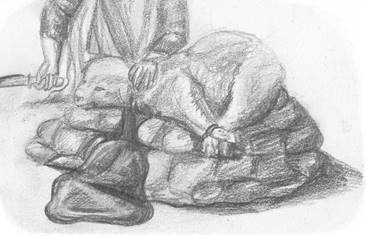