Why I believe the Bible is true
Noah’s flood

Sorry grandad Noah.  I don’t mean to blame this on you – it’s just easier to say.

Genesis 7:17 For forty days the flood kept coming on the earth, and as the waters increased they lifted the ark high above the earth. 18The waters rose and increased greatly on the earth, and the ark floated on the surface of the water. 19They rose greatly on the earth, and all the high mountains under the entire heavens were covered. 20The waters rose and covered the mountains to a depth of more than fifteen cubits. 21Every living thing that moved on land perished – birds, livestock, wild animals, all the creatures that swarm over the earth, and all mankind. 22Everything on dry land that had the breath of life in its nostrils died. 23Every living thing on the face of the earth was wiped out; people and animals and the creatures that move along the ground and the birds were wiped from the earth. Only Noah was left, and those with him in the ark.

So, the highest mountains were covered by about seven metres of water and every land animal and person outside the ark died.  God wiped out the evil, corrupt pre-flood civilization almost without trace.  We should not expect to see significant archaeological evidence for this civilization or the garden of Eden as the whole earth was ripped up.

Creation.com have thousands of articles discussing this from highly-credentialed academics from reputable institutes - many of them converting to Christianity after their studies.  Their story associates Noah’s flood with catastrophic tectonic activity – like the film 2012.  They expect that the earth was flat – no, not like a pancake, but with lesser mountain heights and ocean troughs than today.  One calculation of the ocean depth if the land were a perfectly flat ellipsoid is 2.6 km.  I think this means covering the highest mountains with 7 metres of water implies they could be up to 2,500m high.  The Bible infers a pre-flood world very different to today.  That’s ok, because evolution depends on conditions that can’t even be reproduced in a lab today.

Our museums proudly display fossils of creatures who were preserved by catastrophic flood all around the world but tell another story, full of conjecture and fairy-tale-like once-upon-a-times aka “millions of years ago”.

AnswersInGenesis.org are a similar group who have built a full-sized replica of Noah’s ark with a museum and zoo.  I really enjoy watching their bi-weekly Answers News magazine program on https://www.youtube.com/ channel/ UCicvc24eAbFp-thRrBnSP2A

The controversial Kent Hovind presents creation science very effectively, although rather disrespectful towards advocates of evolution.  His imprisonment for tax fraud does not negate the validity of his teaching.  I’ve found his YouTube videos invaluable.  I love his southern accented “Yer gotta learn to eat the meat and spit out the bones” as an attitude to learning from broad sources, including those we disagree with.

Some explain Noah’s flood as a confusion of the black sea flooding.  I believe this to have occurred as a result of global warming at the end of the post-flood ice-age.  I can imagine the Australian Aborigines taking to nomadic ways after generations of having to abandon flooded coastal cities.

In modern considerations of climate change, we have a lot we can learn from history if we wouldn’t dismiss it in favour of modern conjecture.

Stratigraphy is a fascinating field of science that simulates geological layering in minutes.  They point out this same phenomenon in sand glass art, with coloured sand in water between two panes of glass.  This clearly demonstrates rapid geological layering and opened my eyes to see the same in erosion from the outgoing tide as we see on a continental scale claimed to be billions of years ago.

Folded rock layers require layers of deposits to remain as clay for millions of years, contradicting other premises of evolutionary geology that clay turns to stone before such time. 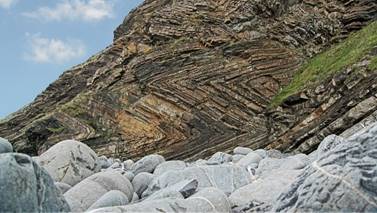