Why I believe the Bible is true
Post-Babel dispersion

After God separated tribes by language at Babel, the peoples dispersed across the world.  Having abandoned the wisdom of God guiding them, this threw many cultures back to stone-age hunter-gatherers as they wandered to their new abode.  Without a settlement, they could no longer build time-intensive tools to refine metals.  The preservation of knowledge would have succumbed to raw survival.  I believe the immediate exiles from Babel would have remembered fine skills such as Grandad Noah’s mastery of shipbuilding. But this would be lost with time.

Genesis 10:2 The sons of Japheth: Gomer, Magog, Madai, Javan, Tubal, Meshek and Tiras.
3The sons of Gomer: Ashkenaz, Riphath and Togarmah.
4The sons of Javan: Elishah, Tarshish, the Kittites and the Rodanites. (From these the maritime peoples spread out into their territories by their clans within their nations, each with its own language.)

Javan is still the Hebrew word for Greece

Isaiah 60:9 Surely the islands look to me; in the lead are the ships of Tarshish, bringing your children from afar,

Tarshish was an ancient source of tin and other metals, according to this verse an island.  It was the ships of Britain who first brought the Jews back to modern Israel in 1948.

Elishah is associated with Cyprus

Kittim is Italy – just don’t tell them they came from the Greeks unless you have a death-wish ;-).

Rodanites are associated with Rhodes. 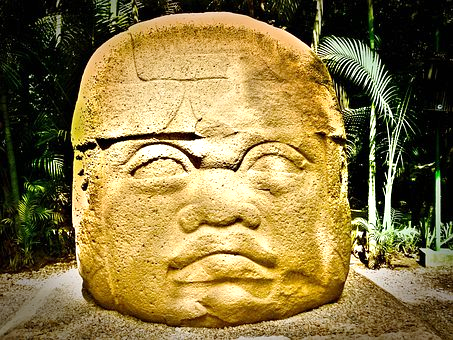 The Olmecs were the earliest American civilization: https://en.wikipedia.org/wiki/Olmecs.  Claims of early Egyptian-Olmec trade are dismissed because evolutionism is uncomfortable admitting that the ancients had amazing ship-building expertise.  Wikipedia offers no alternate explanation of their origin.  This would explain why leopards and jaguars are so closely related, such that they’d be the same species, if only they hadn’t evolved on separate continents.

I can well imagine that the Olmecs’ fathers had sufficient ship-building skills to traverse the Atlantic and maintain trade with Egypt’s Old Kingdom, who had comparable skills.  With wars either side, technologies are lost – just as those in the middle ages gazed up in wonder at the Roman aqueducts or we still wonder how ancient structures such as Giza’s pyramids were built to such precision and how to lift such heavy stones.

Similarly, we see how ancient Polynesians traversed the pacific with regular trade routes.  However, these faltered with warring tribes, to all but forget their ancient knowledge.

Imagine there’s been some apocalyptic event – say a cataclysmic solar flare has fried all electronics around the world.  There’s no communication and cars are useless.  After days of confusion subside to desperation, your nice neighbor is standing at your door with a gun.  You don’t have a gun, so you decide to give him all your food.  It dawns on you that the city is becoming “uncomfortable”.  You pack some essentials together and use your bike as a carrier to head toward the mountains where it might be safer.  Along the way, you get mugged for your bike and tent and continue not-so-merrily on your way, relieved that you still have clothes.  You make it to a secluded place and quickly become adept at bushcraft.  You’ve set up an almost-comfortable camp which your new neighbors like so much they choose to keep it. 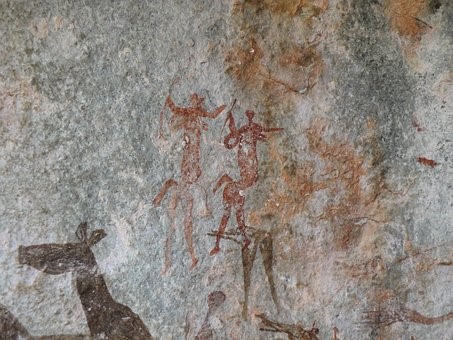 So-repeats this Groundhog Day cycle for a few months until you’ve settled far away.  Your cave offers optimal shelter for the winter.  You decide to decorate a bit, and with charcoal from the fire, you process months of trauma with some art therapy.  You draw a picture of people chasing you with spears, and another of you hunting some sheep.  As you contemplate your situation, it dawns on you, “I’m a caveman”.

This is how it would have been for many tribes for some after the chaos at Babel.

Such a nomadic existence excludes metal technologies and fine stone-crafting.  Metallurgy requires a permanent settlement to develop the infrastructure to mine, smelt, cast and forge.  After a few generations of nomadic existence, these unused technologies are forgotten.  Colonial history demonstrates this among native Americans, Polynesians and Aboriginals.  It’s not that their ancestors were always primitive, but they lost “civilized” technologies while advancing in more practical hunter-gatherer ones.  The native Americans pitied the Europeans who were incapable of survival.  During the New Zealand land wars, the Maori were formidable because of their mobility.  Europeans could be defeated by destroying their base.  The Maori just built a new fortified village within a few weeks, which would be no great loss if destroyed.

The Bible records several people who for a time dwelt in caves.

Also Samson, David, Elijah.  Jesus was buried in one.

Neanderthals were one such group with peculiar deformities through bad nutrition, and prominent jawbones to support muscles from using teeth as tools.  Our ancestors readily interbred with them as is evident in DNA ancestry.  Among such established “missing links” is less diversity that we see in modern humans around the world.