Why I believe the Bible is true
Millions of years

Science cannot prove the age of the earth.  Science can only measure what is presently observable.  We then extrapolate beyond our measurements to predict or model anything else, but this depends on assumptions – particularly when what is observed over a short time is projected over a very long time.  Often in science such assumptions are later proven to be invalid.  Scientific laws have proven reliable in predicting that which is not yet measured.  However, we find even the laws of physics break down when applied to really tiny or really huge things.  The study of quantum mechanics specializes in establishing new theories to cover such problems.

I felt very disturbed when I watched a TV episode where a mathematical genius modelled traffic flow with the same rules as flowing liquid.  This broke individual human behaviour down to something totally impersonal.  Quantum physics is sort of like this.  En masse, light floods an area, but under the hood, there’s billions of individual photons each doing their own thing.

One theory used to align the Bible with apparent age, is that God created all things with history.  When we read the creation story, we imagine Adam and Eve to be created as adults, and Eve had luscious long hair, that would take years to grow.  So, if we looked at Adam on day six of creation, we must conclude that creation was at least 25 years earlier.  This idea can explain evolutionism i.e. God created all things 6,000 years ago, with the appearance of things having existed much longer.  So, God created the stars as well as the light that appeared to emanate from them billions of light years away.

This explanation is interesting, but there are some more scientific theories and observations to consider, which discredit the need for millions of years. 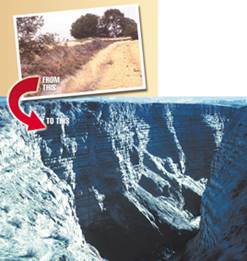 Visitors to various geological wonders are presented with the explanation of these being formed over millions of years.

The Grand Canyon is claimed to have formed over 5-6 million years, yet Burlingame Canyon near Walla Walla, Washington was formed over six days.

Observation tells us that canyons can form quickly, so the presence of the Grand Canyon, whose formation is not recorded offers no proof of millions of years.

This means we should infer a catastrophic event when we view a canyon.

Providence Canyon near Lumpkin, Georgia is another example. https://creation.com/canyon-creation

Canyons that are claimed to be millions of years old look very similar to others that we observed form quickly.   They are also very similar to patterns formed on beaches from a stream after a storm. 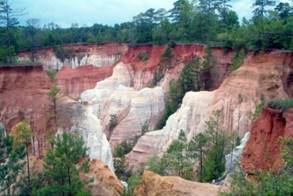 It is interesting to note that huge geological formations such as south Australia look very similar to the structures formed by the outgoing tide on mud flats. 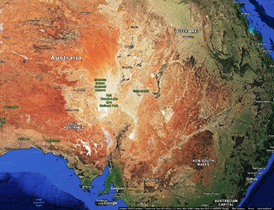 The Mississippi produces a similar formation. 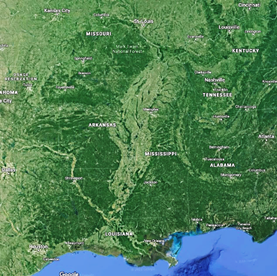 “Millions of years” thinking leads us to think that erosion is a very slow process, yet the twelve apostles near Melbourne are rapidly disappearing as with many other coastal features.  I count five in this picture, plus the remains of two more. 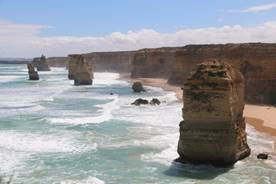 The deposits of rocks, fossils, diamonds, oil and coal presume millions of years to form.  However, each of these are observed to form in short time.

Fossils can form quickly, although by definition, a fossil is formed over millions of years, so this hat is dismissed by the term “permineralized”. https://creation.com/fossil-hat.

https://creation.com/ the-amazing-stone-bears-of-yorkshire tells of a waterfall in Yorkshire that turns teddy bears into stone within a few months.

Googling “how are fossils formed”, the first response is misleading:

Fossils are formed in a number of different ways, but most are formed when a plant or animal dies in a watery environment and is buried in mud and silt. Soft tissues quickly decompose leaving the hard bones or shells behind. Over time sediment builds over the top and hardens into rock. As the encased bones decay, minerals seep in replacing the organic material cell by cell in a process called "petrification." - http://scienceviews.com/ dinosaurs/ fossilformation.html

In reality, when something dies, its carcase is scavenged, including the bones.  Only in dry desert environments do we see bones left un-scavenged.  This scavenging is particularly prevalent under water.  Nearly all fossils are formed by rapid burial in catastrophic flood-like mudflows that bury the creature in so much mud that scavengers cannot get to it. https://creation.com/fast-fossils

Many fossils under forensic analysis suggest the cause of death was the very burial, which preserved the carcase from scavengers. https://creation.com/death-throes

The jewellery industry prides itself on the rarity of diamonds forming over millions of years.  However industrial diamonds are formed in hours.

https://creation.com/ diamonds-in-days-actually-minutes points to LifeGem.com, which will memorialize your deceased loved-one into a beautiful diamond.

So, diamonds don’t need millions of years to form.

https://creation.com/ how-fast-can-oil-form describes how coal and oil can form within years.

So, coal and oil don’t prove millions of years. 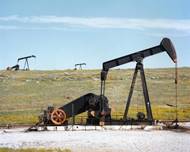 Astronomy presents us with some interesting challenges, particularly: “How can the universe be 6,000 years old when it takes light billions of years to reach us from distant galaxies?”

How do we know there are distant galaxies?

Some question the validity of this assumption.  They mostly question how we can measure the distance to these galaxies, given our inaccuracy in triangulation of nearer objects.  Such questions don’t carry much scientific weight, so I’m happy to ignore them and go with the flow.  Theologically, a huge universe demonstrates the grandeur of an infinite God – so I think “why not!”

God stretches out the Heavens

The Bible says that God has stretches out the Heavens 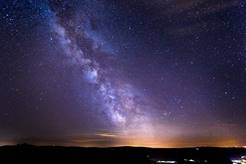 Job 9:8 He alone stretches out the heavens

Zechariah 12:1 … The Lord, who stretches out the heavens, who lays the foundation of the earth, and who forms the human spirit within a person, declares…

Isaiah 42:5 … the Creator of the heavens, who stretches them out, who spreads out the earth with all that springs from it, who gives breath to its people, and life to those who walk on it

Many theologians find the big bang compatible with these verses.  Some conclude that the Earth is indeed the centre of the universe.  Stars could have been created much closer, then stretched out to what we observe today.  While the geo-centric universe theory was rejected a few hundred years ago, quantum mechanics more recently suggests that the centre of the universe is quite arbitrary, so this could actually be the case, but there would be no way to prove this. 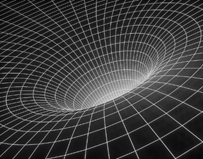 From quantum physics, as expressed in popular science fiction, some suggest that our solar system exists in a time vortex.  i.e. time passes much slower here than in the rest of the universe.  So, light coming from stars billions of light years away could appear to reach the Earth by day four of creation, when the Sun, Moon and Stars appeared to be created.  I find this theologically difficult and suspect that we’d notice the effects on our voyager space probe as it travels beyond our solar system.

The speed of light is denoted in physics as the constant c = 299,792,458 m/s when passing through a vacuum.  This appears in Einstein’s famous E=mc^2 – the energy produced by a nuclear reaction equals the mass lost multiplied by the speed of light squared i.e. the lost atomic mass is accelerated to the speed of light as energy. https://en.wikipedia.org/ wiki/ Speed_of_light 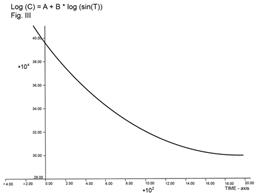 This means that God could have created the heavens as they currently appear, but light rapidly reached the Earth.

https://creation.com/moon-madness discusses various problems with the commonly held belief that the moon is 4.53 billion years old.Particularly when one extrapolates the rate of the moon’s increasing distance from the Earth backwards, the moon would have touched the Earth 1.37 billion years ago.

https://creation.com/ exploding-stars-point-to-a-young-universe describes how the lack of supernova remnants in our galaxy conforms to thousands of years – not billions.

I was fascinated to visit Rutherford’s Den museum in Christchurch, where Earnest Rutherford had studied.  This was before becoming famous for his discoveries in radioactivity, particularly determining the nature of the atom as accepted today. 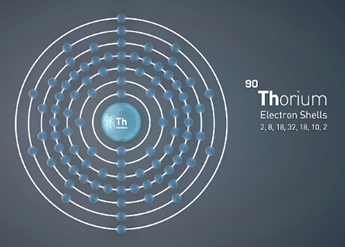 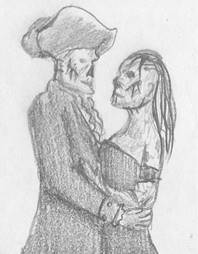 Archaeological finds are often dated using carbon-14.  However, this is somewhat of a joke in the academic community because the dating labs require a guestimate.  If the result is in the ball-park of expectations from other dating methods, it is published.  Otherwise the result is rejected as inconclusive.

Carbon-14 dating is only useful up to 50,000 years, after which so little remains that it is immeasurable.  Potassium-Argon dating covers a slightly longer timeframe.  Again, these presume the same ratio millennia ago as observed today and the same rate of decay.

There are numerous stories of different dating methods contradicting each other – with fossils dating quite differently to the rock they are found in.

Rock samples from a lava dome within the Mount St Helens crater, USA, were dated using the potassium-argon method. Whole-rock samples gave an age of 350,000 years. When some of the amphibole minerals in the rock sample were extracted and analyzed separately, their age was more than double at 900,000 years. Two mineral samples of a different mineral, pyroxene, gave an age of 1,700,000 and 2,800,000 years. Which age is right? None, actually. The lava dome formed after Mount St Helens exploded in 1980 and the samples were just 10 years old.