Why I believe the Bible is true
Exodus

In the 13th dynasty, during the reign of Neferhotep I, the Semitic slaves suddenly departed from Tel ed-Daba51 and Kahun.
Furthermore, Neferhotep I’s mummy has never been found, and his son Wahneferhotep did not ever reign, Neferhotep being succeeded by his brother Sobkhotpe IV.53 The sudden departure of the Semitic slave population fits the biblical account of the Hebrew slaves’ sudden exodus from Egypt after the tenth plague. The pharaoh’s mummy is missing because he died in the Red Sea with his army when he pursued the slaves, and his son never ruled because he died in the tenth plague.

The ensuing Hyksos invasion may have been possible because Egypt lost its army somewhere – how careless.

The last ruler listed in the texts is Nitokerti, the wife of Neferkare, the Younger. The Hebrews called her Gedudah. With her husband gone and her firstborn son, Netjerykare, killed in the last great plague, she alone was left to rule. In this male-dominated society, a queen would be allowed to rule only when there were no male heirs.

I prefer Ken Johnson’s explanation as it collaborates ancient sources such as the Book of Jasher and Josephus.  Both of these sources are useful to understand the problem of the commonly held secular timeline.

The exodus is a favourite for the faithless and scoffers.  Many “helpful” scholars naturalize the supernatural plagues with ludicrous explanations.

The plagues were: (https://en.wikipedia.org/ wiki/ Plagues_of_Egypt) 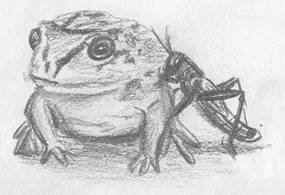 Some of the explanations do not contradict the Biblical story.  Others remain a miracle, particularly due to their discriminatory nature in favour of the Hebrews.  The Bible recognizes these as miracles, which means they are beyond natural explanation – acts of an all-powerful God.

The exodus itself is the most denied miracle – but it’s the demonstration of God’s power witnessed by the most people at one time.  The events of the exodus are also a prophetic type of God’s plan for Christianity.

Most maps in our Bible have Israel crossing the reed sea near the Nile, going to Mt Sanai in Egypt and wandering around the Sanai peninsula for nearly 40 years.
This totally contradicts the Biblical text.

The Red Sea was really the Reed Sea!?  I expect an Englishman would initiate this linguistic faux pas, which appears in the footnotes of some Bible translations.  The Reed sea is to the north of the Gulf of Suez in Egypt.  This is followed by the miracle of Egypt’s army drowning in two feet of water that the slaves just waded through.

The Sinai Peninsula is and always was in Egypt.  The slaves left Egypt.

Exodus 3:1 Now Moses was tending the flock of Jethro his father-in-law, the priest of Midian, and he led the flock to the far side of the wilderness and came to Horeb, the mountain of God.

12 And God said, ‘I will be with you. And this will be the sign to you that it is I who have sent you: when you have brought the people out of Egypt, you will worship God on this mountain.’

Mt Horeb is or is near Mt Sinai

Exodus 17:6 I will stand there before you by the rock at Horeb. Strike the rock, and water will come out of it for the people to drink.’ So Moses did this in the sight of the elders of Israel.

They hung around there through the whole Sinai experience, including worshipping the golden calf that “just fell out of the fire” – yeah right Aaron!!! 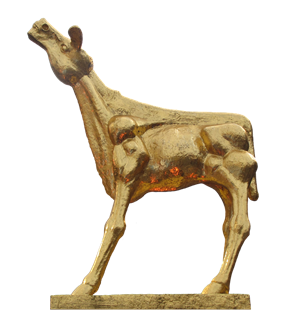 Exodus 33:6 So the Israelites stripped off their ornaments at Mount Horeb.

This is where I believe Moses led Israel out of Egypt 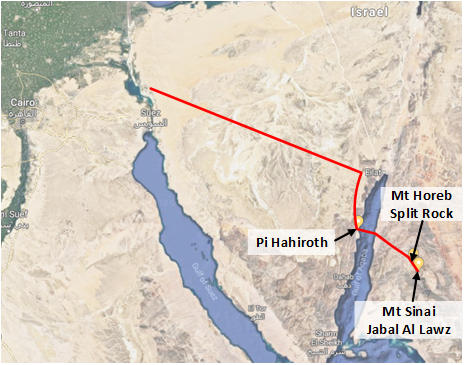 Exodus 13:17 When Pharaoh let the people go, God did not lead them on the road through the Philistine country, though that was shorter. For God said, ‘If they face war, they might change their minds and return to Egypt.’ 18So God led the people around by the desert road towards the Red Sea. The Israelites went up out of Egypt ready for battle.

Exodus 14:1 Then the Lord said to Moses, 2‘Tell the Israelites to turn back and camp near Pi Hahiroth, between Migdol and the sea. They are to camp by the sea, directly opposite Baal Zephon.

This possible location for Pi Hahiroth has a beach with enough space for millions of people to camp (~20m^2/man).  It is only reachable from a narrow canyon, where God could easily separate Pharaoh’s army with his column of fire and smoke. 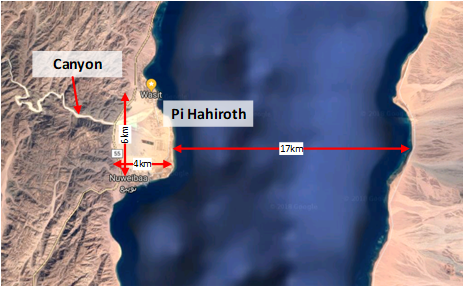 The controversial Ron Wyatt claims to have discovered strange coral formations here reminiscent of chariot wheels.  This has been confirmed by a few others.  However, many of Ron’s other discoveries are considered dubiously such that most dismiss this claim also.

However, we could tip off the Egyptians the location of their misplaced army ; -).  That could have come in real useful in 1948 when they couldn’t knock off a few Jews with second-hand weapons.

A few days later they reached Horeb, where God promised Moses they would worship him.

Exodus 17:5 The Lord answered Moses, ‘Go out in front of the people. Take with you some of the elders of Israel and take in your hand the staff with which you struck the Nile, and go. 6I will stand there before you by the rock at Horeb. Strike the rock, and water will come out of it for the people to drink.’ So Moses did this in the sight of the elders of Israel. 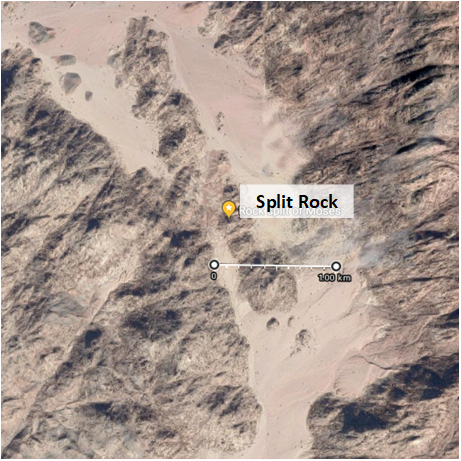 http://splitrockresearch.org/ content/ 100/ field_reports/ the_split_rock has images of this rock and their story. I’m sorry I could only find a random source.Note that this rock produced enough water to quench millions with their livestock.On Google maps, we can zoom into the said rock, which is surrounded by dried river beds.

Unfortunately, the Saudi’s aren’t keen on millions of Christians and Jews traipsing through their holy Islamic land and they’re not interested in the tourist dollars, so they’re happy for Egypt to continue to reap the claim for Mt Sinai.

10km SSE is Jebel al Lawz, which some claim to be the real Mt Sinai.  On https://goo.gl/maps/HTUt7Mqseh92 some claim it looks burned from the fire of God, but this is unclear to me.

Unfortunately, these claims are hard to test, but they’re the best fit to the Biblical narrative, which excludes the Sinai Peninsula in Egypt.

It is indeed disappointing that history has been obfuscated by evolutionism. This includes the narrative of many theologians and publishers who prefer the Bible to be inaccurate than to believe in miracles, while still claiming to believe in the virgin birth and resurrection.

The exodus is history as prophecy

The Passover is another prophecy of God’s sacrifice.  Each house prepared a perfect lamb to be sacrificed in place of their sin.  After receiving this sacrifice, they were baptized by passing through the waters of the Red sea to a new life, walking with God. 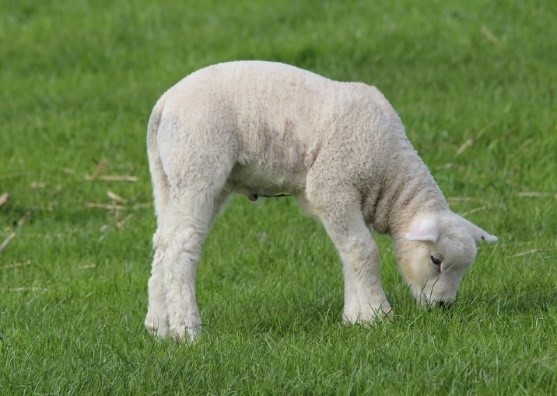 Don’t be ignorant of the fact.  This really was history.  Flee from those who teach otherwise.