Why I believe the Bible is true
How does the Bible present 6,000 years

The count begins with creation and Year 1. The passage of time from the Creation to the Exodus is measured by adding the ages of the Patriarchs at the birth of their firstborn sons, later through express statements, and later still by the synchronised reigns of the kings of Israel and Judah. The Exodus takes place in the year anno mundi 2666, or AM 2666, exactly two thirds of the way through the four thousand years, the Temple in Jerusalem is commenced 480 years, or 12 generations of 40 years each, after that, and 430 years pass between the building of the Temple and its destruction.

I’ve cut this short because the source aligns with modern rabbinical teaching. This diverges from historicity to avoid Daniel 9 pointing to Jesus as the Messiah.  According to Dr Ken Johnson (http://biblefacts.org/), this corruption of the Jewish Calendar was documented in their Seder Olam around 169AD.

And Dr Ken Johnson’s books and resources, particularly his translation of the Seder Olam.

In the following diagram, I’ve collated this for myself.  While later genealogies purposely skip names, Genesis 5 and Genesis 11 have no room for extra generations, specifying the father’s age at their son’s birth.  For the sake of argument, I don’t mind a 5% margin of error.  The point is the Bible clearly records creation around 6,000 years ago. 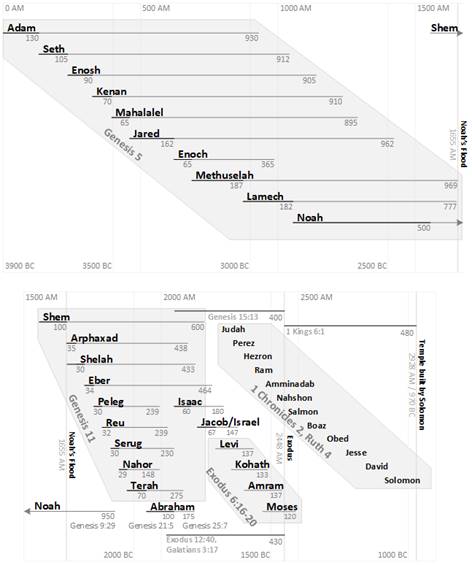 The weakest point in this timeline is from the exodus to Solomon.

1 Kings 6:1 In the four hundred and eightieth year after the Israelites came out of Egypt, in the fourth year of Solomon’s reign over Israel, in the month of Ziv, the second month, he began to build the temple of the Lord.

But these 480 years correlate reasonably with the genealogies in 1 Chronicles 2 and Ruth 4. In Numbers 1:7, Nahshon leads Judah in the Exile.  I’m a bit suspicious of the spread of ages from Salmon to Solomon, but the Bible records that Obed, David and Solomon were born in their fathers’ old age.

Those who question the Bible prefer to dispute earlier details although they are strongly collaborated in chronologies and genealogies around the world.  This is well presented in Ken Johnson’s book “Ancient Post - Flood History”.

Exodus 12:40 Now the length of time the Israelite people lived in Egypt was 430 years.

Being from Jacob’s arrival to the exodus, but the footnotes point out that other sources state, “Egypt and Canaan”.  Also, from

Exodus 6:16 These were the names of the sons of Levi according to their records: Gershon, Kohath and Merari. (Levi lived 137 years.)
18The sons of Kohath: Amram, Izhar, Hebron and Uzziel. (Kohath lived 133 years.)
20Amram married his father’s sister Jochebed, who bore him Aaron and Moses. (Amram lived 137 years.)

If we even assume Kohath arriving as an infant and he and Amram having their son at death, 133 + 137 + Moses’ 80 years at the exodus, = 350 falls short of this statement.  This conflict is resolved by:

Genesis 15:13 Then the Lord said to him [Abraham at age 70], ‘Know for certain that for four hundred years your descendants will be strangers in a country not their own and that they will be enslaved and ill-treated there.

Galatians 3:16 The promises were spoken to Abraham and to his seed. Scripture does not say ‘and to seeds’, meaning many people, but ‘and to your seed’, meaning one person, who is Christ. 17What I mean is this: the law, introduced 430 years later, does not set aside the covenant previously established by God and thus do away with the promise.

Here’s a comparison of secular history of civilisation with the Bible. 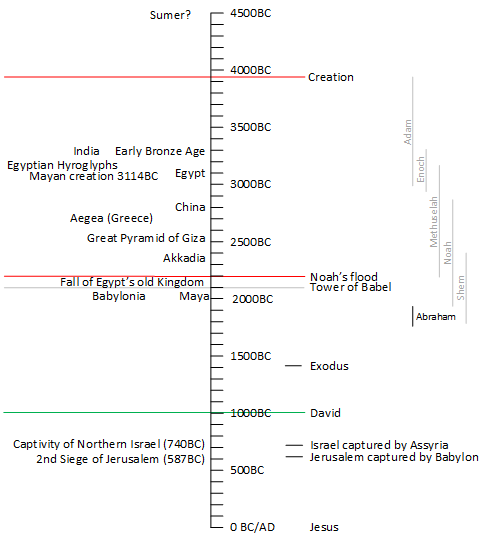 Two red lines are crossed: Creation, and Noah’s flood which wiped out all land life except those on Noah’s ark.

Secular history converges with the Bible around King David: https://en.wikipedia.org/wiki/David