What does the Bible say about the future?
An overview of history yet future

The Bible records the history of the Jewish people since creation.  Some of this is written in advance as prophecy.  The New Testament carries a mantra of “as it’s written by the prophet…”.  Many claim the book of Daniel was written after the fact because it so clearly outlines the rulers succeeding him but gets certain “facts” about his own time wrong.  Just because his eyewitness account differs from other, lesser-preserved accounts does not mean it’s wrong.  The Dead Sea Scrolls prove that the book of Daniel was preserved in scripture before Jesus’ execution and the destruction of Jerusalem which he foretells.

These are the main events of future prophecy.

Although we shouldn’t set dates, not doing so, leads many to think everything’s about to happen in the next few years.  This model provides a realistic unfolding of geopolitical changes. 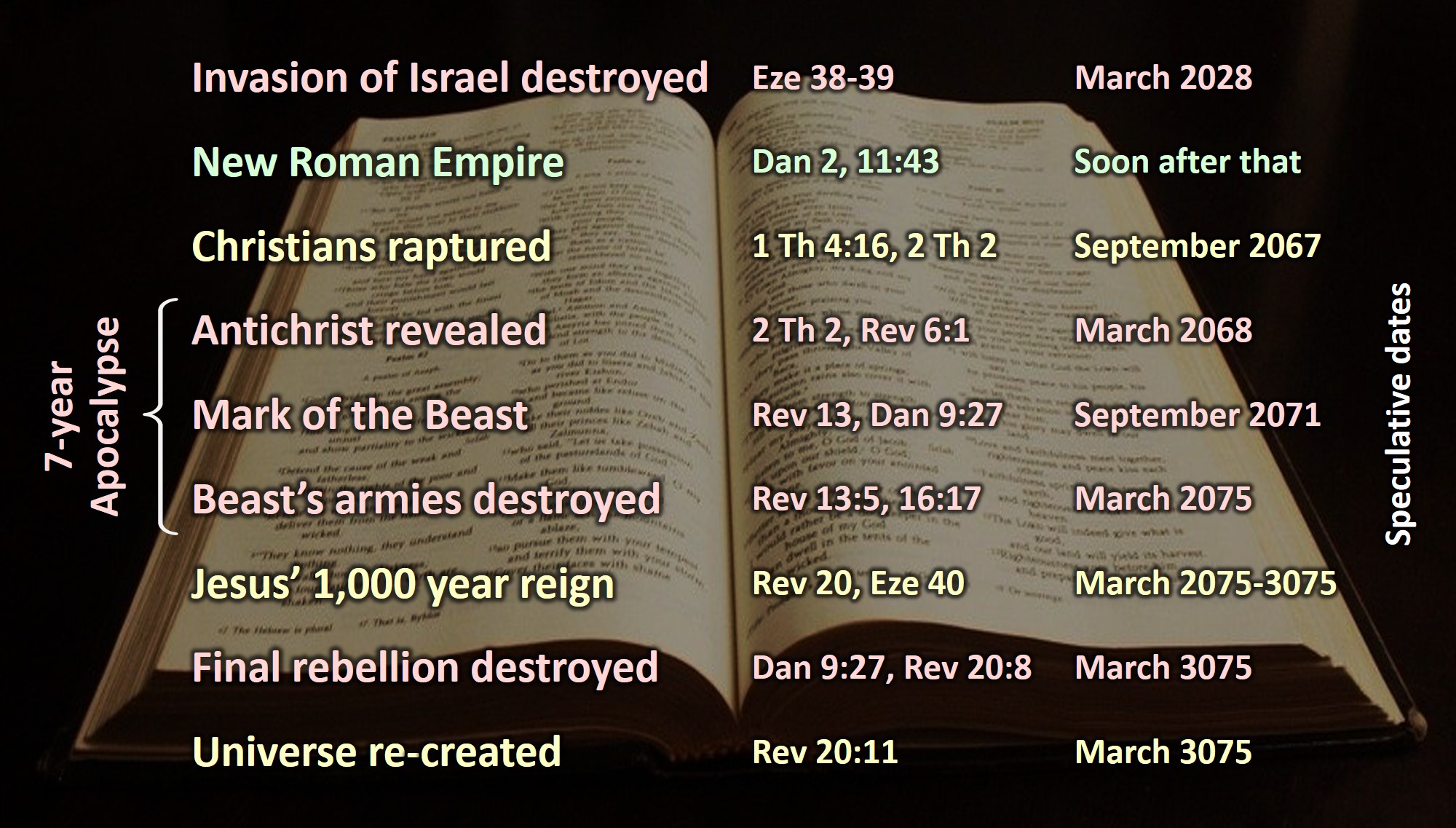 As we see Russia getting chummy with Iran and Turkey on Israel’s doorstep in Syria, and America withdrawing military influence over the middle east, it seems that the stage is being set for this epic battle detailed extensively by Ezekiel and alluded to by others.  In this battle, Israel will be overwhelmed by a sudden invasion seeking to pillage the prosperity of this “nation that was rebuilt after a great war”.  Around the world, people seeing this will ask about the leader of this campaign, “Are you the one the ancient prophets spoke of?”  The English-speaking world, along with Saudi Arabia will protest this onslaught, but not risk supporting their ally.  In their helplessness, the God of Israel will step in, setting off this volcanic region to slaughter the occupying forces.  This battle will spill over the world to drastically change geopolitics.  There’ll be no doubt that Jehovah is the God of Israel who stepped in to obliterate such overwhelming forces.  Israel will use the left behind weaponry to satisfy their fuel needs for seven years.

Out of the chaos caused by the battle of Gog of Magog, when God sends fire upon Russia and “those living overseas without a care overseas”, a new empire will arise, which will bring the Antichrist to power.  I believe this empire will be a resurrection of the Roman empire, consisting of ten kingdoms.

False prophets and the Apostacy

Jesus warns of a great apostacy (rebellion) before his return – as is the pattern at the end of an age.  People will turn their backs on God to rebel against him and stop following the truth of the Bible.  Assuming the end of the age to be imminent, many are looking for apostacy in the Church today.  But that’s exactly what happened between the Pharisees and the Sadducees that led to civil war.  The fight against the apostacy was the apostacy.  Because of this, many will abandon the love for other parts of Christ’s body and start attacking each other.

The Bible talks of a moment when the saints will be taken to be with the Lord forever like he did with Enoch and Elijah.  This will come as quickly as “the twinkling of an eye”.  There’s much debate about the timing of this, with some rejecting it completely – just as some deny the Universe being 6,000 years old.  Satan stirs up religious animosity to divide the Church.  We must be open to different interpretations that embrace the truth of scripture, and expressions of our faith.

I believe the Rapture will happen before the Tribulation.  Those “left behind” will realize the significance of the prophecies and understand the catastrophe that has just happened.  This will convict them of their disbelief and turn them to seek God.  While many will turn to God, many others will rise up in rebellion against him, and persecute those who turn to him.  This event will distinguish those who act the Christian from those who live in true relationship as believers in Christ, and love God with all their heart, mind, and strength.  This event will also greatly alter geopolitics.

Israel will become a significant world power and benefactor to those who support them.  A charismatic leader will rise to lead the world to enforce a world peace treaty with Israel for seven years.  Many will accept his claim to be the promised one of their religion.  However, he’ll not be known before “the Restrainer” is taken out of the world, which I believe to be the Rapture of the true Christians.  Paul calls this person “the man of sin”.  The books of Daniel and Revelation cover this time period extensively.

This will be a time of trouble like the world has never seen.  Over the first 3.5 years, there’ll be global and civil unrest, plagues, famine, and an earthquake that’ll kill over half the world’s population.  Then things will get really bad.  The world emperor will become a tyrannical dictator, making everyone worship him by receiving his mark of allegiance, or be cut off from commerce, and have their heads cut off.  Those who take this symbol of worship will fare worse in the ensuing plagues, that are reminiscent to those that struck Egypt before Israel’s Exodus under Moses.

At the end of these seven years, the Antichrist will gather a huge army from around the world in the valley of Armageddon in Israel to oppose Jesus’ return.  Jesus will come with the saints and slaughter this army with the words of his lips.  The greatest earthquake the world has ever seen will reshape the Earth.  Mountains will fall, valleys rise, and the islands will crumble into the ocean.  I speculate the continents will be gathered into a new Pangea.  The Antichrist and his False Prophet will be thrown into Hell, and Satan will be imprisoned for 1,000 years.

Jesus will regather the remainder of Israel, who are scattered throughout the world, and they’ll know their God like never before.

Jesus will restore the Earth to how it should have been.  In Isaiah 11, we read that animals won’t eat each other.  The lion and the lamb will lie down with each other and infants will play near cobras’ and vipers’ nests.

Isaiah 11:4 But he [Jesus] will judge the poor with righteousness and chastise with equity for the gentle people of the Earth.  He’ll strike the Earth with the rod of his mouth, and he’ll execute the wicked with the breath of his lips.

Ezekiel 40-48 describes the new city.  The temple courtyard will be 1.8km square – the size of a city center.  This is large enough for representatives from every family in every nation to come to celebrate the feast of tabernacles (tents).  If they don’t come, they don’t get rain that year.  Priests will offer sacrifices, not to seek forgiveness of sins, but in remembrance of what Jesus did.

The Earth will be governed by the saints who returned with Jesus at the end of the Tribulation.

These 1,000 years will prove that even without Satan’s schemes, people will reject God.

In Revelation 20, we read how, at the end of 1,000 years, Satan will be released to gather a great rebellion from all over the Earth to fight against Jesus and the saints.  They’ll be consumed with fire from the sky.

Then Satan will be judged and thrown into Hell, along with all those who reject Jesus’ help to cover their sin.  They’ll be tortured in Hell for eternity.

Then this Universe will be destroyed and a new one created as described in Revelation 21.  The new Jerusalem will be 2,200km square and its tallest building 2,200km high.  On the present Earth, that’s big enough to cover much of Egypt, Greece, Turkey, Iraq, and Saudi Arabia, and reach to the outermost parts of the atmosphere, beyond where satellites orbit.  This new Earth will be perfect, as in the garden of Eden before Adam and Eve sinned.  There’ll be no more death, suffering, weeds, parasites, or sickness.