What does the Bible say about the future?
What do I think about global warming?

I’m skeptical and struggle with conflicting arguments and loud, emotional, politically charged assertions backed by questionable data.  I do my best to reuse, recycle and not over-consume; and I’m all for looking after our planet, but I strongly doubt increased CO2 is the cause for increasing temperatures.  I further doubt this to be catastrophic.  I therefore strongly reject some measures being proposed to combat global warming, with some such measures being anti-biblical.  I feel that climate change is being over-emphasized to distract from other humanitarian issues.

The wider discussion of “climate change” encompasses lots of good stuff about looking after our environment, particularly reducing pollutants, but the hottest 😉 topic seems to be global warming.

Atheists refuse to consider
the existence of my most intimate friend.
We should not be surprised
when we disagree on other things.

Main-stream science claims that God doesn’t exist and preaches evolution over billions of years and global warming.  Given that first point contradicts history, as recorded in the Bible, and I’m scientifically satisfied that the Universe was created 6,000 years ago, I can’t blindly accept their word on anything else.  I’m appalled by quotes on Facebook beginning with “Science says…” as if science were an unquestionable god.  The whole premise of science is to question everything.

These guys agree that both CO2 and temperatures have increased.  They’re not convinced of one causing the other, since correlation is not proof.  It’s commonly said that “shark bites increase with ice-cream sales”.  But both are caused by another factor: In warmer weather, people buy more ice cream and go swimming.  CO2 is the second most prolific greenhouse gas after H2O, which has a far greater influence on temperature.

We’re talking about a greenhouse effect.  But greenhouses are great for growing plants.  I understand that rocks containing dinosaur fossils present higher temperatures and CO2 during a time where life thrived.  So, I really don’t see the problem.  The evidence that I see suggests that a warmer Earth is good, but we should consider moving away from the coasts.  However, governments don’t seem very serious about this, nor about replanting forests en masse.

There are many other factors to increased temperatures such as solar activity and CO2 from forest fires and volcanos.  The little ice age from the 16th to 19th centuries infers that temperature increase since then includes a natural restoration, with earlier data being increasingly speculative and unreliable.

2,500 years ago, Sun Tsu, a Chinese general wrote a political treatise called The Art of War.  A key point is:

To garner support from citizens, governments should present an enemy that they will combat on their behalf 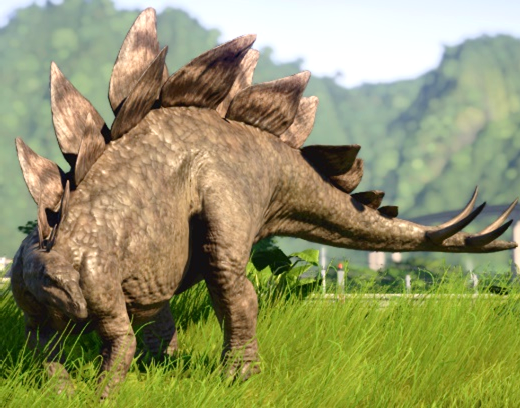 You see, there’s this stegosaur near a distant village, that sometimes rampages the cornfields.  Now everyone knows that dragons (dinosaurs) are huge, they can fly, breathe fire, and are ferocious carnivores.  Our chief recognizes this threat and drums up support from the village to wipe out this disastrous threat before it starts coming after our babies and flies over our village, burning it to the ground.  The chief then accumulates resources from the villages to combat this threat, some of which goes towards poisoning the stegosaur, and much towards his lifestyle.

We see this today in our increasingly partisan politics, with one side presenting the other as the enemy that can only be defeated by voting us e.g., Trump vs. Clinton.  Wars are also an excellent opportunity – consider the anti-Nazi and anti-Jewish propaganda around WWII.  Japanese women threw themselves off cliffs to avoid being raped and tortured by the “devilish” American soldiers.

Given this trait, we must expect politicians to use any opportunity to gain votes and taxes.  Climate change is exaggerated for political gain.  It’s difficult to ascertain to what extent.

Unfortunately, this trait is a broader human weakness, which also applies to academia.  We prefer to think that academics are perfectly objective unbiased arbitrators of facts.  Newsflash: they’re human – just like you and me!  No matter how honest we are, we’ll exaggerate things to achieve what is best in our own eyes.  To be honest, I must admit, I’m prone to this myself.  In academia, there’s huge reward for toeing the party line.  We all need to live.  For academics, that comes from research grants.  But people only want to pay for what they want to hear.  There are so many “missing links” discovered just before research grants have run out, which have subsequently been debunked as fraudulent – see https://creation.com/science-fraud-epidemic and https://creation.com/evolution-fraud.  Scientists who even slip out the word “creation” or “God” are severely reprimanded.  Creationist views are completely censored from mainstream publications.

We often hear “climate change is the single most pressing global issue”.  This totally distracts from other issues, particularly the spiritual wellbeing and morality of society.  The most pressing issue is that most people are so self-centered that they are going to Hell and taking our planet with them.  We’re killing babies and the sick; and blaming everyone else for our troubles.  It’s for this reason that Jesus was born to live and die as a man on our behalf.  When our relationship with God is restored, selfishness is reduced, and people tend to look after the environment better – just compare the [ex-] Christian world with the rest.

A part of the Paris Agreement, as I crudely understand it, would have rich nations sponsor poor nations to clean up their act.  This would effectively “take money from poor people in rich countries to give to rich people in poor countries”.  i.e., the millionaires always find ways around taxes and the rulers of poor countries who would steward the funds are renowned for syphoning funds into their personal mansions – that’s why their countries are poor.  So, while this is very well intended, I think it would be ineffective.  I think it better for western countries to invest locally in developing technologies to support good ecology.  Further, the expected results from such huge investment seem ludicrous.  It’s interesting that the people of France have been protesting weekly over the measures imposed on them by their government.

Carbon taxing is a means by which people delegate their responsibility to others to resolve.  People continue over-consuming, feeling self-assured that they are paying someone else to compensate for them.  Effectively, the rich delegate their inconvenience to the poor, who use that money for survival, and perhaps aren’t doing what’s expected, but it’s “out of my back yard so I don’t care”.

Renewable energy sources sound great, but often burden the environment in other ways to compensate for our over-consumption.  Interestingly, investment in nuclear technologies such as thorium and fusion are immediately dismissed.  Hydro is often rejected due to environmental change, which might wipe out some obscure sub-species.

Reducing human population by 90% has been proposed by some.  I’d suggest, they be the first to volunteer 😉.  This extreme point reveals an underlying anti-biblical motivation: that the Earth and nature are more sacred than people.  Ancient pagan religions included such nature-worship in various forms.  The Bible teaches that the Earth was created for people.  We were mandated to take dominion over nature – not to pillage it unsustainably, but to manage it wisely.

The mathematical models that predict catastrophe are grounded in evolutionism – i.e., slow and gradual processes shape our world over billions of years.  Therefore, if we see rapid change, something’s terribly wrong – like mass-extinction stuff.  Scientists have been surprised how quickly nature recovered from Mt St Helens’ eruption and also our Kaikoura earthquake, where nature is recovering faster than our transport infrastructure.

Creationists generally model a single ice-age following Noah’s flood 4,200 years ago around the time people spread out over the Earth after the Babel incident.  We experienced rapid global warming thereafter, which resulted in the extinction of species adapted to the cold after Noah’s flood.

When Noah stepped off the ark, God promised:

Genesis 8:22 As long as the Earth remains, seedtime and harvest, cold and heat, summer and winter, and day and night will never stop.

So, no matter how bad things get, no matter what scenarios Hollywood or Paris come up with, we’re not going to destroy the Earth by our mismanagement.  God has built in intricate mechanisms for nature to self-regulate.

However, there’s another side to this:

Romans 5:12 So, just as sin came into the world through one man, and death through sin, likewise death came to all people, because everyone has sinned.

We’ve been destroying the world since we treated our authority with contempt in Eden, eating of the forbidden fruit.  Since that day, our sin has been corrupting the Earth.  Obviously, our over-consumption and greed, but the Bible teaches that other sins impact the environment at a spiritual level – beyond the measurements of natural science.

Theologically, I expect catastrophic climate change to increase with our sin as Jesus’ return approaches.  I expect this also applies to earthquakes, famines, and social and global conflicts.  However, having tested the hypothesis that earthquakes are increasing, I concluded this to not be the case as also demonstrated by https://www.icr.org/article/324/.  Likewise, according to https://creation.com/global-warming-facts-and-myths, severe weather events are not increasing, but rather decreasing since 1950.

Although I’m biased towards nature going crazy as Jesus’ return approaches, I find no data to clearly support this.  However, it’s reasonable that such severe events are restricted to the Tribulation that starts when the world emperor enforces a 7-year world peace treaty with Israel.