What does the Bible say about the future?
7,000-year timeline

Creation was around 4,000BC, there’s been 2,000 years since, and we’re expecting yet another 1007 years to begin soon. This looks curiously like a week of 7,000 years being the duration of this space-time.

This echoes the creation story, with six days of work followed by one day of rest.

Daniel 9:24 Seventy weeks [of years] have been allocated for your people and your holy city, to complete the offence and put an end to rebellion and make reconciliation for lawlessness, and to bring everlasting righteousness, and to seal up the vision and prophecy, and to anoint the Most Holy.  25So know and understand, that when the command is made to restore and build Jerusalem until the Messiah the Prince will be seven weeks, plus sixty-two weeks.  The street will be built again and the wall, even though the times will be full of trouble.  26After sixty-two weeks, the Messiah will be executed, but not for his own crimes. The people of that empire will destroy the city and the holy temple.  Its end will be with a flood, and until the end of the war, there’ll be desolations.  27He’ll confirm the treaty with many for one week.  In the middle of that week, he’ll stop the sacrifices and offerings.  He’ll lay out disgusting things to desecrate it, until his evil is complete, and his fate will be poured out on him.

The decree to rebuild Jerusalem was given by King Artaxerxes around 445BC, which is around 69 * 7 = 483 years before Jesus’ death around 32AD.  Those who calculate this use weeks of 360-day prophetic years to prove this being fulfilled to the day.  E.g., Ken Johnson’s Ancient Prophecies Revealed.  I’m content with a ballpark figure.

The prophecy describes a gap between Jesus’ death and the final seven years, which requires a Jewish temple, which is yet to be built.  The breaking of the treaty in the middle coincides with the beginning of Revelation 13:5’s 3.5 years.

After this time of great trouble (Tribulation), Jesus will reign with the saints for a thousand years.

Revelation 20:1 I saw an angel come down from Heaven with the key to the bottomless pit, and a great chain in his hand.  2He grabbed the Dragon, that old serpent, which is the Devil, and Satan, and bound him for a thousand years.  3He threw him into the bottomless pit, imprisoned him, and set a seal on him, so that he couldn’t deceive the nations anymore – not until the thousand years are finished.  After that he must be set free for a little season.  4I saw thrones, and those who sat on them, and they were appointed to judge, and I saw the souls of those who were beheaded for telling people about Jesus and the Word of God.  These hadn’t worshipped the Beast or his image, nor received his mark on their foreheads or in their hands.  They lived and reigned with Christ for a thousand years.

7When the thousand years are over, Satan will be set free from his prison, 8and will go out to deceive the nations which are in the four corners of the Earth, the Czar and Russia, to bring them together for battle, a number like the sand of the sea.  9They went up over all the Earth and surrounded the camp of the saints and the precious city.  Fire came down from God out of the sky and devoured them.  10The Devil that deceived them was thrown into the lake of fire and burning sulfur, where the Beast and False Prophet are and will be tormented day and night forever and ever.  11I saw a great white throne and him who sat on it.  The Earth and the Universe had fled away and no longer existed.

So, the real end of the world is over 1007 years away.  The coming seven-year Tribulation is the end of the age.  For a brief time, Satan will rule the world, but he’ll be imprisoned for 1000 years while Jesus rules over the Earth with his saints.  At the end of this, Satan will be released to lead a final rebellion.  Then he’ll be thrown into Hell with those who follow him by not submitting to Jesus’ rule over their lives.  Then this temporary Universe will be replaced with an eternal one.

If we consider a week, the “last days” would be Friday and Saturday, and maybe Thursday.  Since Jesus, we’ve been living in the last days. 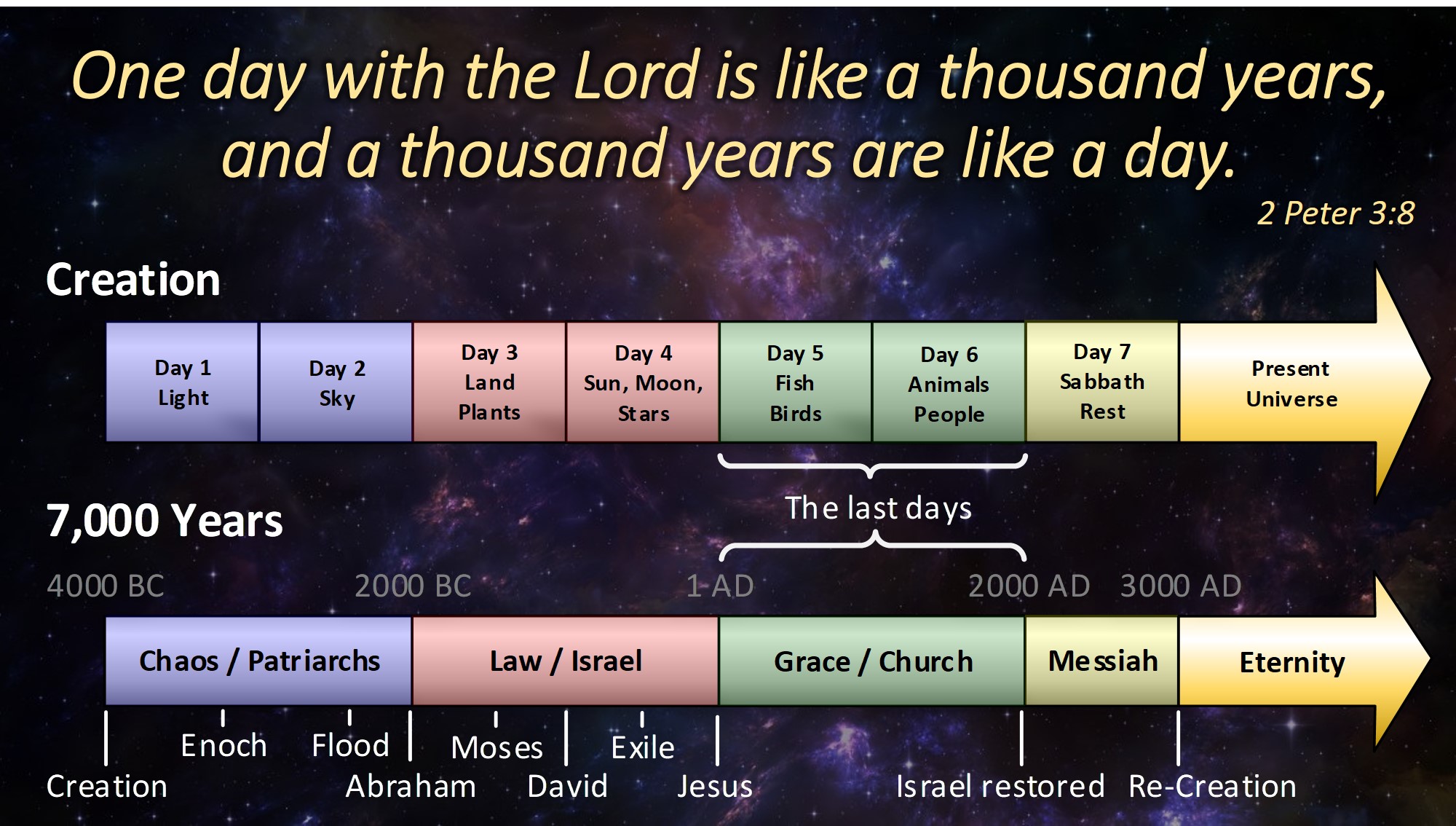 The book of Enoch prophesies of ten weeks of centuries or ten times seven hundred years.  Some ancient Church fathers taught that Christ would return 6,000 years after creation to reign for 1,000 years.

This 7,000 year timeline highlights the four ages of Chaos, Law, Grace and Messiah.

The Age of Chaos

The age of Chaos is named after the formlessness of the Earth in Genesis 1:2. From Genesis 5 and 11, we add up 1948 years to Abraham’s birth.  During this age, God revealed himself through the patriarchs who were kings, priests, and prophets.  At the end of this age, was the apostacy at Babel.  God judged the world by causing each family to speak a different language.  70 family patriarchs are named in Genesis 10.  God found Abraham to be his friend and established a permanent covenant with his descendants.

The Age of the Law

The Age of the Law stretches back to the covenant with Abraham, although the Law came through Moses 430 years later.  During this age, God revealed himself through the people of Israel.  Near the end of this age, the Pharisees and Sadducees apostatized into civil war against each other.  40 years after Jesus’ ministry, God judged the Jews with the Romans destroying their temple and sending them into exile.  God raised up the Church to bring righteousness and salvation to the whole world.

The Age of Grace

The Age of Grace is also known as the Church Age.  While Israel was exiled according to numerous prophecies, belief in their Messiah spread around the world.  Now God has restored the land to Israel, both Jews and Christians expect the Messiah to come soon to overthrow evil and establish a permanent world empire.  We soon expect the Antichrist to set up a world empire and lead the world into apostacy.  When the world gathers in battle against God at Armageddon, Jesus will destroy them by prophecy.  50kg hailstones and fire will fall from Heaven, and the Earth will be reshaped by the greatest earthquake.  As with Noah’s flood, or the return from Babylonian exile, a few will survive, through whom the world will be repopulated.

The Age of Messiah

Then Jesus will restore all creation and establish a world empire, where there’ll be rest for 1,000 years.  The resurrected saints will govern the Earth, and Israel will become the geopolitical center of the world.  At the end of this, Satan will be let loose to lead a final apostacy.  God will bring final judgement on Satan and this world.  Then God will create a new Universe which will be eternally perfect.

The seven churches of the Church Age

Various commentators such as Chuck Missler and Arnold Fruchtenbaum note how the seven churches of Revelation 2-3 seem to echo seven ages of the Church.  E.g., https://www.ariel.org/outlines/o-ast-esc.pdf, page 21

I find this theory interesting in hindsight but recognize critique that this is rather western-centric, ignoring the development of the Church in other parts of the world.  However, it’s an excellent overview of western church history.