What does the Bible say about the future?
Why did God demand the genocide of Canaan?

Following God’s divine destruction of Noah’s flood, and Sodom and Gomorrah, God demanded that Israel wipe out the Canaanites to take their land.  They were to wipe out even their livestock, and leave no man, woman, or child alive from these people.  Israel failed to do this, and so the corruption of these people plagues them to this day.

Genesis 9:20 Noah became a farmer, and he planted a vineyard.  21When he drank the wine, became drunk and lay naked in his tent.  22Ham, the father of Canaan, saw his father naked, and told his two brothers outside.  23Shem and Japheth took a garment, and laid it across their shoulders, and walked backwards, and covered their father’s naked body.  They looked away and didn’t see their father naked.  24When Noah woke up from his wine, he found out what his younger son had done to him.  25He said, “Canaan is cursed.  He’ll be the lowest of servants to his brothers.”  26He said, “The Lord God of Shem will be blessed, and Canaan will be his servant.  27God will expand Japheth’s territory, and he’ll live in the tents of Shem, and Canaan will be his servant.”

That’s just weird: dad gets drunk and crashes naked in his tent, his son Ham sees this and tells his brothers what an idiot their dad is.  The brothers dare not look at their father’s nakedness but cover him.  When dad sobers up, he gets so angry that he curses the son’s kid forever.  He blesses the brothers in very different ways for their discretion.

Something more’s going on under the surface.  Perhaps his grandson was already rebellious, or perhaps Noah spoke that into being, so that Canaan turned out to be a right rebel.  But then Canaan’s nephew, Nimrod, son of Cush, was the tyrant who enslaved the world to build the tower of Babel.

Dr Ken Johnson and others claim that the Genesis Apocryphon describes a vision which Noah had at the time, which revealed the evil that Canaan would do (column 14).  Noah woke to see this beginning to be fulfilled and cursed Canaan for what was clear he would do in the future.  This curse was fulfilled when the Israelites conquered Canaan and subjugated those they didn’t kill.

https://en.wikipedia.org/wiki/Canaan_(son_of_Ham) points to Ham’s and Canaan’s descendants in Genesis 10, and to the Book of Jubilees.

Genesis 10 describes the 70 families of the Earth that spread out from Babel, Jubilees 8 describes the geography thereof.  Japheth would occupy the north, Ham, the south, and Shem would occupy the middle.  I crudely picture that the white peoples descend from Japheth, the blacks from Ham and the browns from Shem.  However, significant migration complicates this.

So, Cush settled southern Arabia, India, and Australia.  Cush is translated Ethiopia in the King James Bible, where Sudan is today.  Mizraim is the Hebrew word for Egypt.  Phut was allotted Libya, and Canaan was allotted West Africa.

This is roughly how the Earth was allotted among Noah’s sons and grandsons.  Some locations are certain, and others are highly debated. 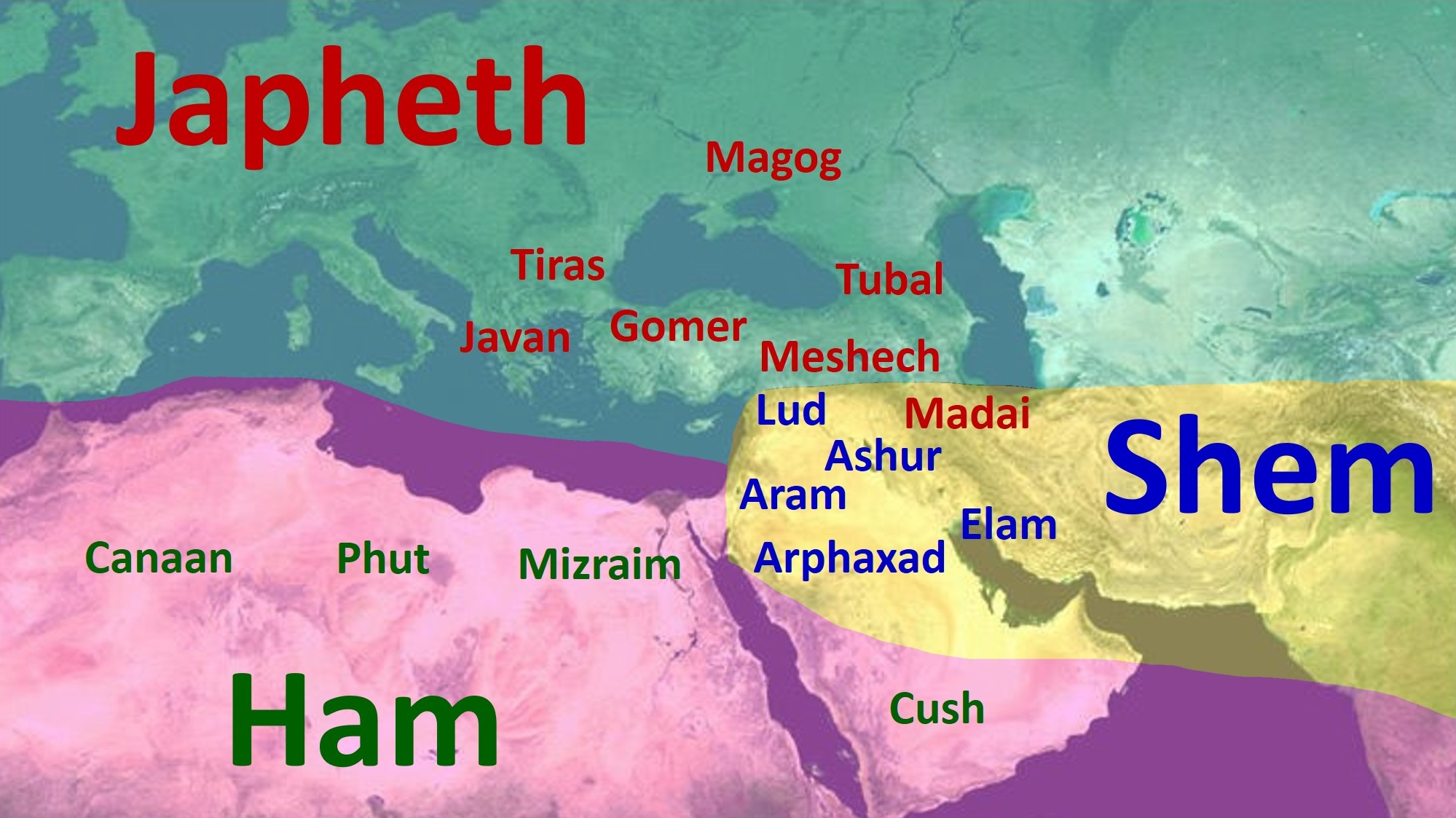 Jubilees 9:14 And thus the sons of Noah divided unto their sons in the presence of Noah their father, and he bound them all by an oath, imprecating a curse on every one that sought to seize the portion which had not fallen (to him) by his lot.

Note that Madai negotiated to settle among the sons of Shem Jub 10:35.  This sort of fulfills Jasher living in the tents of Shem Gen 9:27.

Genesis 10:15 Canaan had his firstborn, Sidon, and Heth, 16the Jebusite, the Amorite, the Girgashite, 17the Hivite, the Arkite, the Sinite, 18the Arvadite, the Zemarite, and the Hamathite.  Later, the families of the Canaanites spread abroad.  19The border of the Canaanites was from Sidon, as you approach Gerar, until Gaza, as you go to Sodom, Gomorrah, Admah, and Zeboiim, even until Lasha.

So, Canaan was allotted the west of Africa but settled the east coast of the Mediterranean.  Before that, in Jubilees 8:1-4, Kainam, son of Arphaxad, son of Shem, sought out a place to seize a city.  He found ancient pre-flood writings carved on the rock, containing the teachings of the Watchers.  These are the fallen angels who interbred with human women.  This is believed to be around Mt. Hermon, in the north of the Golan.

Jubilees 10:29 And Canaan saw the land of Lebanon to the river of Egypt that it was very good, and he went not into the land of his inheritance to the west (that is to) the sea, and he dwelt in the land of Lebanon, eastward and westward from the border of Jordan and from the border of the sea. 30And Ham, his father, and Cush and Mizraim, his brothers, said unto him: "Thou hast settled in a land which is not thine, and which did not fall to us by lot: do not do so; for if thou dost do so, thou and thy sons will fall in the land and (be) accursed through sedition; for by sedition ye have settled, and by sedition will thy children fall, and thou shalt be rooted out for ever. 31Dwell not in the dwelling of Shem; for to Shem and to his sons did it come by their lot.  32Cursed art thou, and cursed shalt thou be beyond all the sons of Noah, by the curse by which we bound ourselves by an oath in the presence of the holy judge, and in the presence of Noah our father." 33But he did not hearken unto them, and dwelt in the land of Lebanon from Hamath to the entering of Egypt, he and his sons until this day.  34And for this reason that land is named Canaan.

So, Canaan annexed Lebanon eastward, including the Golan and Mt Hermon where the ancient writings of the Watchers were found.  When Israel entered this area after the Exodus, they encountered giants, including the Anakim, who made them seem as small as grasshoppers, and the 13-foot King Og of Bashan (the Golan).

Numbers 13:33 We saw giants there, the descendants of Anak, who come from the giants.  We felt like grasshoppers in our own sight, and also in theirs.

Deuteronomy 3:11 Because only Og king of the Golan remained of the giants.  In fact, his bed was made of iron.  It’s still in Rabbah of the descendants of Ammon.  It’s 4 meters long and 1.8 meters wide.

1 Samuel 17:4 A champion came out of the Philistines’ camp, named Goliath, of Gath, whose height was 2.8 meters.

According to https://answersingenesis.org/bible-characters/giants-in-the-old-testament/ there were many other giants recorded in extra-biblical writings – up to 9 meters tall – like huge power pylons.  Commentators suggest that the giants got shorter as their genes were diluted – Goliath was two thirds of King Og’s height 400 years later.

Many other historic sources and legends from around the world remember giants.  Somehow, they’re always the bad guys, of vicious character.  I’ve heard that the native American greeting showing the hand proved they didn’t have six fingers like Goliath’s brother.

2 Samuel 21:20 There was another battle in Gath, where there was a huge man, who had six fingers on each hand and six toes on each foot – twenty-four in total.  He was also born to the giant.

It would seem that the Canaanites practiced genetic engineering to produce super soldiers.  The Book of Giants, which is also found among the Dead Sea Scrolls, describes other genetic manipulations, crossbreeding different kinds of animals to produce stable offspring.  This is why God commanded:

This leaves me thinking that the creatures of Greek Mythology may have been real.  It seems that Canaan, like Noah’s generation had reached the point of no return and must be wiped out to prevent further contamination of the Earth with abominable giants and possibly chimera.

Even without these weirdnesses, the horrific pagan practices of Canaan such as torturous child sacrifices are well known and suggest sufficient reason for their destruction.  In this case, instead of God’s direct intervention, he commanded the Israelites to wipe them out.  This becomes an important example for us in conquering the giants in our own lives; and those that we leave unconquered will be a burden and menace to us.  Note that in each battle, God was fighting with Israel, so they weren’t exactly on their own.  This comforts us, that overcoming giants in our lives is in partnership with God.