What does the Bible say about the future?
Modern timeline

From Ezekiel 36, we see a sequence of events, which we seem to be in the middle of.

Ezekiel 36 promises Israel’s return, but little more – a bit like the Balfour declaration of 1917, promising the Levant to Israel in return for their help in World War One.

Ezekiel 37 is the valley of dry bones.  After Israel’s restoration in 1948, the holocaust survivors saw themselves in this prophecy.  They’d been little more than dry bones for millennia.  Suddenly they were a mighty army.

Ezekiel 38-39 describes Israel thriving in peace and safety after being restored following a great war, where previously the land was abandoned for eons.

Micah 5 carries a subtle prophecy that provides a countdown to Jesus’ return through eight wars with Syria.  We’ve seen four such wars, each under different prime ministers, with one defence minister presiding over two of these.

This prophecy expects another three invasions from Syria and/or Lebanon, probably all before the Tribulation.  Each under different prime ministers and defense ministers.  I suspect that one of these could open the way for the Temple to be rebuilt.  Ezekiel 38’s war might be one of these, although Syria is excluded from the list of attackers.

As we speculate over the future, some fervently preach an imminent end as has been done since the beginning.  I contrast this with the possibility of Jesus returning in about 50 years’ time.  The dates I give intend to help understand the concept.  While we really don’t know when things will happen, it’s important to understand these prophecies.  Then we can answer sensational claims that bring a bad reputation to the evangelistic and apologetic value of Bible prophecy.

The imminent return theory requires that a lot of remaining prophecies be squashed into a seven-year period.  But this is still possible.  Key points are the Ezekiel 38 invasion with its seven-year burning of weapons, the restoration of the Roman Empire, the rebuilding of the temple, and the seven-year Tribulation.

A return in 50 years’ time allows for prophecies such as these to unfold, as well as geo-political and societal developments, that bring the wickedness of our world to reach the depravity of the times of Noah and Lot.  Then the world will be in such a state that God must intervene before its wickedness consumes every single person.

I find it interesting that between the beginning of Jesus’ ministry around 30AD and the destruction of the temple in 70AD are 40 years.  This is a common biblical theme in God carrying his people through troubled times, giving us every possible opportunity to grow and depend on him.  If Jesus were to return in 50 years, we could see the Ezekiel 38 invasion, which will prove to the world, that Israel’s God is the one true god.  Then we’d have 40 years to embrace this truth before God begins to pour out his judgement on the world in the seven-year Tribulation.  This provides plenty of time for the restoration of the Roman Empire, and for Israel to rebuild their temple that features in Tribulation prophecies.

This theory also fits 120 years between Israel’s return in 1948 and the beginning of the tribulation in 2068, similar to the time God allowed for repentance before the flood.

Genesis 6:3 The Lord said, “My spirit won’t always put up with people, because they’re corrupt.  So, I’ll allow them another 120 years.”

I understand that Israel has everything ready to rebuild the temple, but from its go-ahead to completion would take 3.5 years to fulfil religious preparations.  An imminent Tribulation implies the peace treaty begins the building process, and as soon as it’s consecrated, it’s defiled by the Antichrist.  This makes some sense in that God might prevent worship that rejects God’s Messiah.  One could also say that the Antichrist is waiting for this moment.  However, God allowed sacrifices to continue 40 years after Jesus’ death, so I see no reason that God wouldn’t allow them to perform sacrifices again.  This would indeed draw many people back to God as the prophetic imagery of these ancient practices is demonstrated to the world. 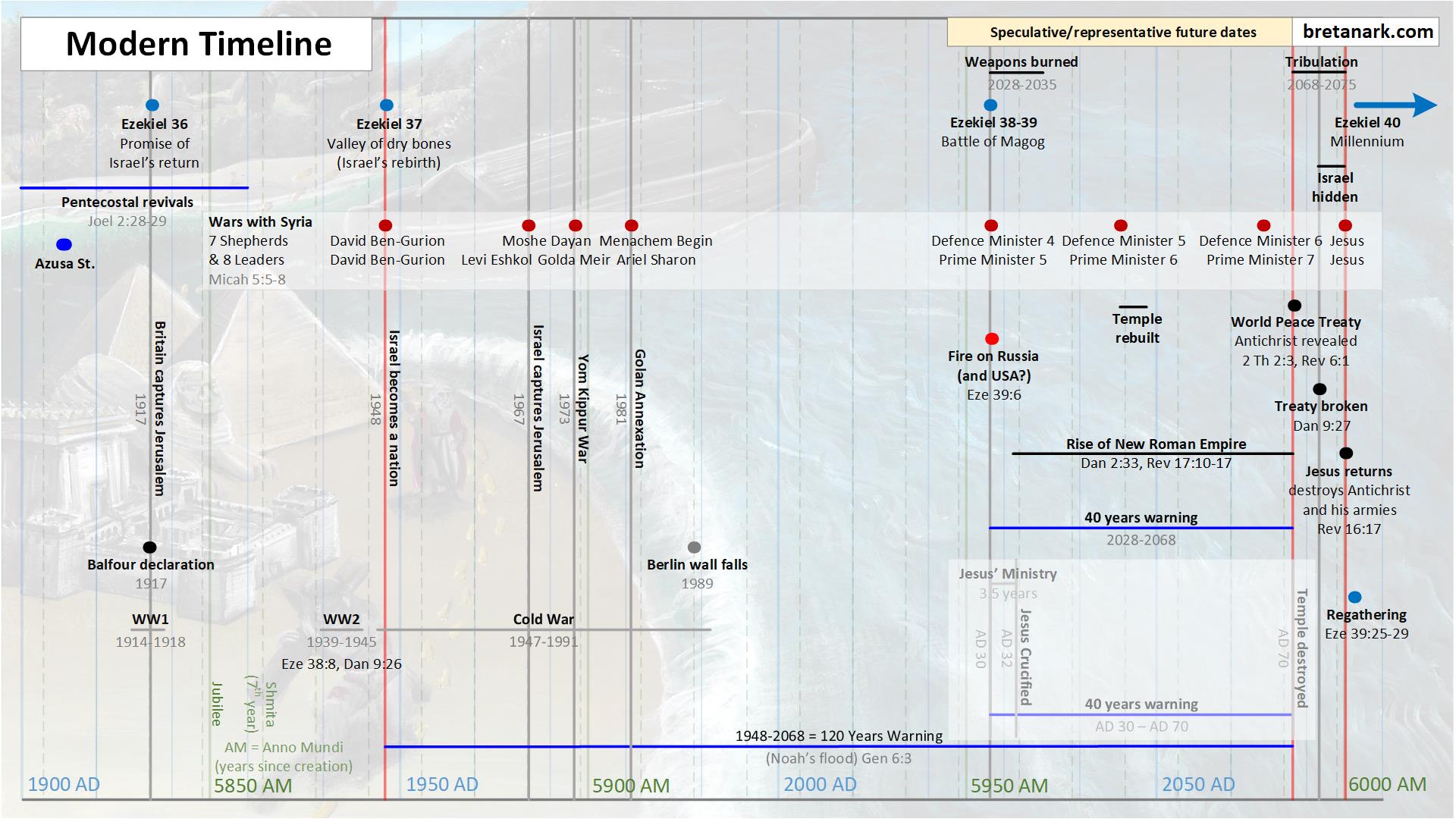