What does the Bible say about the future?
When will the Rapture happen?

Now that I’ve shocked you by committing the unpardonable sin of date-setting, I’ll explain.  I’m sure this date is wrong, but there’s a lot to be learned from how I’ve calculated this; to provide balance with teaching that the Rapture is imminent, which is indirectly, yet vaguely date-setting.  It’s critical that we plan to live out our lives teaching the next generation to serve Christ, while being prepared for him to take us at any time.  While we hope in Jesus coming soon, we can also hope in a great outpouring of the Holy Spirit, to turn around the rebellious society we live in.  This is what our ancestors have experienced many times in the past as they have endured the tribulations of life.  When Jesus comes, he should find us going about the work he has commissioned us to do:

Matthew 28:19 Go and make disciples of all nations, baptizing them in the name of the Father and of the Son and of the Holy Spirit, 20and teaching them to obey everything I’ve commanded you.

No one knows when Jesus will return

Acts 1:7 Jesus said to them, “It’s not for you to know the times or the seasons which the Father has kept under his authority.

However, there’s great riches to be gained from seeking to understand what God has hidden.  And it guards us from false teaching, which may distract us from our great commission.

According to Dr Ken Johnson, some ancient Church fathers taught that Jesus would return 6,000 years after creation.  This aligns with Enoch 93’s 10 weeks of centuries, and views creation being a prophecy of 7,000 years.

This is quite contrary to Daniel 9’s prophecy that the Messiah would be cut off 483 years after the decree to rebuild Jerusalem – not the temple.  This decree was probably given by Artaxerxes in his 20th year (445BC).

According to the Essene calendar, the year 6,000 after creation begins on the 20th of March 2075.  I speculate this would be when Jesus returns in glory to defeat the Antichrist and restore the Earth.  This implies that the Tribulation starts seven years earlier when the world-peace treaty is enforced by the Antichrist, perhaps on the 21st March 2068.  Many believe that Matthew 24:36 refers to the feast of trumpets; and leads into the Tribulation.

Matthew 24:36 But no one knows when that day and hour will be, not even the angels of Heaven, but only my Father.

According to the Pharisees, the Feast of Trumpets https://en.wikipedia.org/wiki/Rosh_Hashanah, which is associated with the coming of the Messiah, starts when the new moon after the autumn equinox is first witnessed by two independent watchmen.  Therefore “no one knows the day or the hour” when this feast begins.  This would be on the 10th of September 2067.  However, the Essenes start the Feast of Trumpets on the 21st. 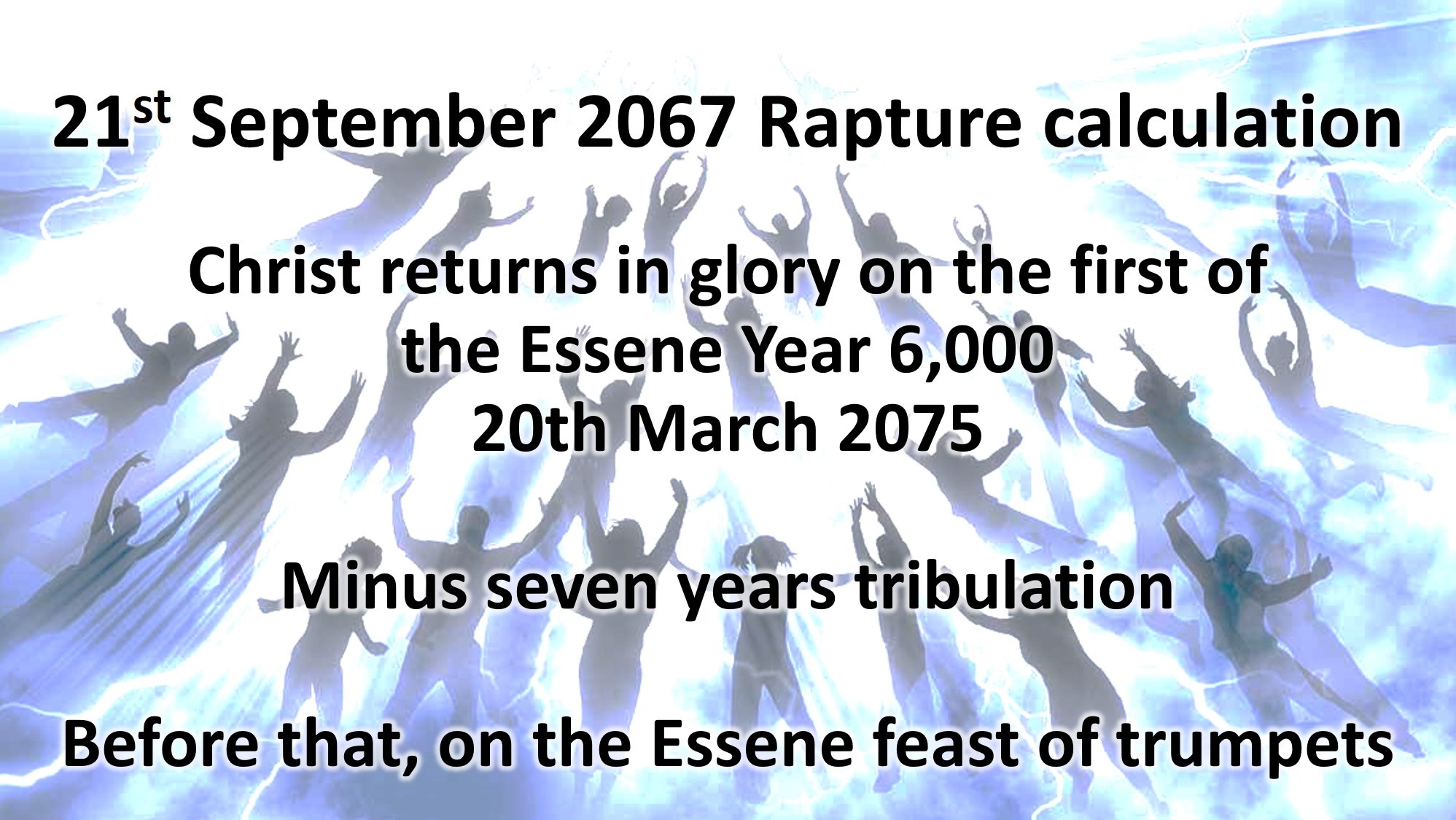 While many teach that the Rapture is imminent, my best calculation guesses this to occur in several decades.  I expect this is just as wrong as every other calculation.  I only state this to balance the discussion on imminence with some real numbers based on investigative reasoning, rather than an emotionally short-sighted view of the world becoming unrecoverably wicked.

There are many prophecies, which must be fulfilled before the Tribulation.  This includes the Russian invasion of Ezekiel 38-39; and the ensuing revival of a 10-kingdom Roman Empire, including the three kingdoms of Egypt, Libya and Sudan, which the Antichrist will overthrow.  50 years is a reasonable timeframe for these events to unfold.

While we patiently hope for Jesus’ soon return, we delight in the present outpouring of his Holy Spirit, and making disciples of people from every nation, tribe, and language.