What does the Bible say about the future?
The Millennium

In Revelation 20 we read how Satan will be bound and the saints who overcame the Beast will reign with Christ for 1,000 years.  Creation will be restored like the times of Adam and Eve when people would live hundreds of years and we’ll live in peace with nature.

There are many prophecies about this time, which is beyond my focus in this book.

Ezekiel 40-43 describes the rebuilt Millennium temple.  Its courtyards are the size of a modern city center – large enough for representatives from every family on the Earth to come to celebrate the Feast of Tabernacles together with Jesus every year. 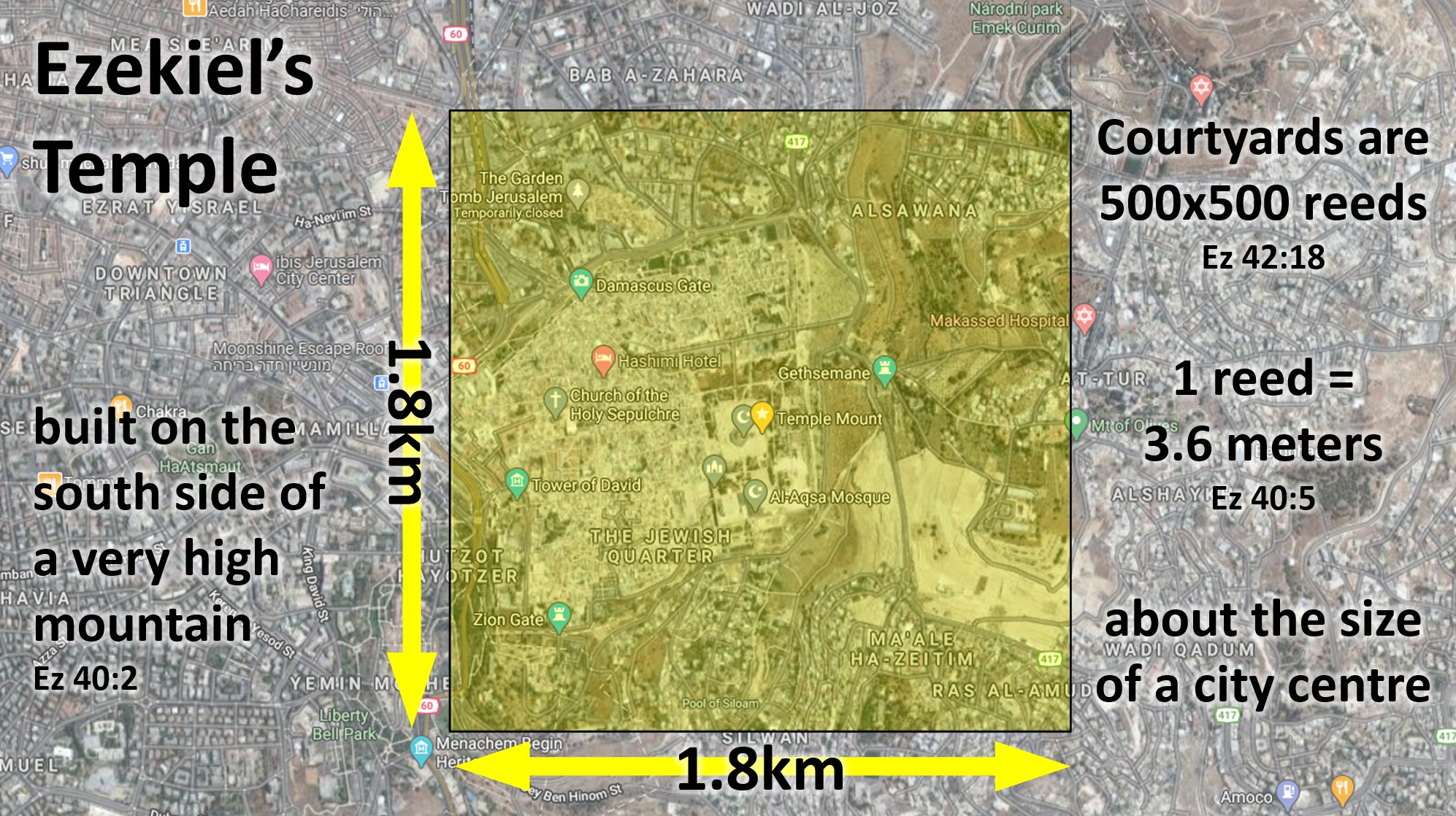 Ezekiel 40:2 In the visions of God, he brought me into the land of Israel and put me on a very high mountain, next to which was something like the frame of a city to the south.

5And look, there was a wall around the building, and in the man’s hand was a measuring reed six cubits long, by the cubit and a handbreadth [3.6 meters].  So, he measured the width of the building, one reed, and the height, one reed.

Ezekiel 42:20 He measured it on all four sides.  It had a wall around it which was 500 reeds long and five hundred wide – to separate the sanctuary from the common area.

Ezekiel 44:9 The Lord says, “No foreigner, whether uncircumcised in heart, or physically uncircumcised, will enter into my sanctuary, or any foreigner who lives among the people of Israel.”

This is curiously reminiscent of

(Hmm, it bothers me that that sounds rather replacement-theological)

Zechariah 14:1 The day of the Lord is coming, and you’ll divide the spoils among yourselves.  2Because I’ll gather all nations against Jerusalem to battle.  The city will be taken, the houses ransacked, and the women raped.  Half of the city will be taken into captivity, but the rest of the people won’t be taken from the city.  3Then the Lord will go out to fight against those nations, like when he fought on the day of battle.  4On that day, his feet will stand on the mount of Olives, which is near Jerusalem to the east.  The mount of Olives will be split down the middle toward the east and the west.  There’ll be a very wide valley.  Half of the mountain will be shifted to the north, and half to the south.  5You’ll flee to the valley between the mountains because the valley of the mountains will reach up to Azal.  You’ll flee, like when you fled because of the earthquake in the days of Uzziah king of Judah.  The Lord my God and all the saints will come.  6On that day the light will be neither clear, nor dark.  7It’ll be a day known only to the Lord, which doesn’t seem like either day or night.  In the evening it’ll be light.  8On that day, living waters will flow from Jerusalem, half toward the Dead Sea, and half toward the Mediterranean Sea, in summer and in winter.  9The Lord will be king over all the Earth.  On that day there’ll be one Lord, and his name will be the only one.  10All the land will be made like a plain from Geba to Rimmon, south of Jerusalem, which will be lifted up and inhabited from Benjamin's gate to where the first gate is, to the corner gate, and from the tower of Hananeel to the king's winepresses.  11People will live in it, and it’ll never be destroyed again, and Jerusalem will be safely inhabited.

12This will be the plague with which the Lord will strike all the people who fight against Jerusalem: Their flesh will be eaten away while they stand on their feet, their eyes will be eaten away in their holes, and their tongue will be eaten away in their mouth.  13On that day the Lord will bring a great chaos among them.  Everyone will take hold of the hand of his neighbor, and they’ll attack each other.  14Judah will also fight at Jerusalem and the wealth of all the nations around them will be gathered together: lots of gold, silver, and clothes.  15A similar plague will strike the horse, mule, camel, ass, and all the animals that’ll be in those camps.