What does the Bible say about the future?
Rapture theories

There are various theories of when the Rapture will take place, and some deny it, just as the Sadducees denied the resurrection in Jesus’ time.  The first group I will offend will be those similarly-minded liberal theologians, who deny God’s sudden and catastrophic interventions in history – in Noah’s flood, Babel, Sodom, and a six-day creation six thousand years ago.  While God often works slowly, gradually, and naturally in our lives and society, he does suddenlys too.

1 Thessalonians 5:3 While people are saying “Peace and security”, destruction will suddenly fall on them – just like labor pains on a pregnant woman.  They won’t escape.

In the natural, there are times in each of our lives, where we’re driving along, enjoying the ride and suddenly life crashes and we’re left in a confused mess, picking up the pieces.

There seem to be as many understandings of the Rapture as there are denominations, some of which are birthed out of such disagreements.  There’s all sorts of variants in between those I’ll describe.  I think that’s ok because we’re speculating on future events.  We must learn from the Pharisees of Jesus’ time to not be so dogmatic that we end up killing each other and the one we hope for.

When considering the second coming of Jesus, some imagine a single event.  Did Jesus come in 1AD, or 30AD, or 33AD?  Yes!  Well, roughly.  This was his first coming, which included his birth, his ministry, and his sacrifice.  Likewise, his second coming covers events over years prior to his millennial reign.

Some believe that things will get betterer and betterer as the world gradually evolves towards a true knowledge of God, culminating in Jesus returning when the world recognizes his sovereignty.

Matthew 23:39 I tell you, you won’t see me again until you say, “Blessed is he who comes in the name of the Lord”

This theory believes that we’re already in the millennium.  i.e., the kingdom of God is here.  The Tribulation occurred around the destruction of Jerusalem around 70AD, now Christ’s Church is gradually encompassing the world until all are believers.

God has a different perception of time.  The argument for Amillennialism takes a thousand figuratively:

Psalm 50:10 I own every creature in the forest and the cattle on a thousand hills.

This precedent equates “a thousand years” with “an eternity”.  This is also used to excuse the creation days as being figurative to allow for evolutionism’s millions of years.

I have no patience for this liberal theory.  It denies dozens of prophecies being fulfilled over the past 100 years around the restoration of Israel.  If Jesus’ “eternal” kingdom is already here, why does the world seem to be getting more evil?  It’s certainly not becoming less evil.

I understand St. Augustine popularized this teaching around 430AD when he spiritualized the fulfillment of biblical prophecy, teaching that such prophecies are just as allegorical as the “fabulous” stories of Genesis and Exodus.  This was a fallacy of the Pharisees and Sadducees too.  He also taught that the Church replaces Israel for the fulfillment of future prophecy, which excused and promoted much antisemitism.

Post-Tribulation combines the Rapture with the resurrection at the end of the world.  This theory often ignores the millennial reign of Christ as a variant of amillennialism.

Post-Tribulation sounds like the saints would be raptured after Jesus returns with the saints at the end of the Tribulation – which is a contradiction.

Most fundamentalist teachings I come across date the Rapture around the Tribulation.

Mid-Tribulation believes that we’ll be spared the “Great Tribulation” and be raptured out at the mid-point of the Tribulation, around when the Antichrist desecrates the temple, and the Mark of the Beast is enforced.

End-Tribulation believes Christ will Rapture the Church just before the final outpouring of God’s wrath – maybe just a few days before Jesus returns.    Opponents call this the “bungee-Rapture”.

Pan-Tribulation is a tongue-in-cheek reminder, which I really love, based on the prefix “pan-” meaning “all” or “union”:

Whatever happens, it’ll all pan out

Romans 8:28 We know that all things work together for the good of those who love God, to those who are called according to his purpose.

We should be prepared for whatever God brings – by submitting to him and each other in humility and service.  We must remain dedicated to studying the whole Bible, spending time with other believers, and demonstrating God’s love and truth to all people.

I think each of these three theories are worthy of consideration.  Each honors God and the authority of scripture, but from different perspectives.  We must be careful not to slander those who hold a different understanding.

Whatever happens, we must always be ready for Jesus to come for us at any time – whether by the heavenly sound of golden trumpets, or the desperate honking of a speeding truck.  None of us are guaranteed tomorrow. 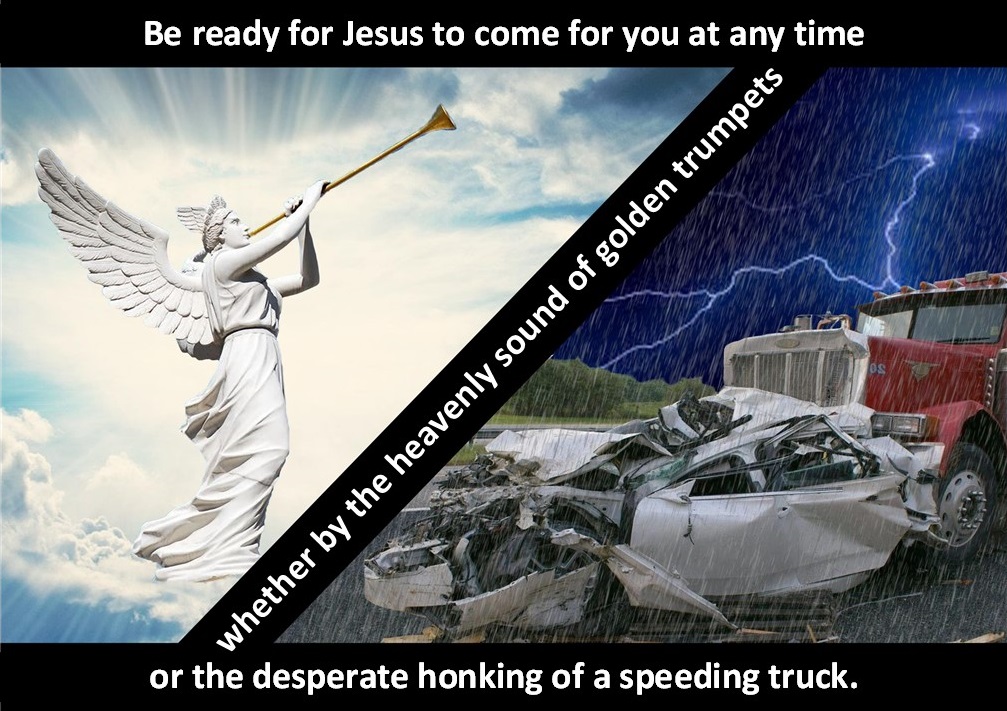