What does the Bible say about the future?
The new creation

At the end of the Millennium, Jesus will destroy a final rebellion.  After this present space-time is destroyed, God will replace it with a new Heavens and a new Earth. This is prophesied particularly in

Revelation 21:1 Then I saw ‘a new Universe and a new Earth,’ because the first Universe and the first Earth had passed away, and there was no longer any sea.  2I saw the Holy City, the new Jerusalem, coming down out of the sky from God, prepared as a bride beautifully dressed for her husband.

... 16The city was laid out like a square, as long as it was wide. He measured the city with the rod and found it to be 2,200km in length, and as wide and high as it is long.

The new Jerusalem will be a 2,200 km square and also as high.

Isaiah 19:24 When that day comes, Israel will be one-third [of God’s people], along with Egypt and Assyria.

Earlier Israel's King Solomon governed this territory and had treaties with the surrounding lands beyond that.

It turns out my musings were a gross underestimate.

The pictures below show these dimensions. Upon first reading this description, I imagined a cube. Some think the ancient pyramids were derived from heavenly architecture. Such interpretations would be appropriate for a building but not a city. How does one measure the height of a city? I'd measure the height of the tallest building on the tallest hill. But 2,200km is incredible. It would reach well beyond our atmosphere. The space shuttle orbits at about 500km. However, such a building is known in science fiction as a space elevator.

Considering the surface dimensions, centered over Jerusalem, it would encompass Egypt, Turkey, Iraq, and half of Arabia - the general bounds of biblical narrative. Noah settled in Turkey, Abraham migrated from the east of Iraq and spent time in Egypt and his son Ishmael settled the south east in Arabia. Israel escaped Egypt via western Arabia at Mt Sinai, to settle the center of this land. The Assyrians and Babylonians dominated the middle and later the Greeks dominated the north. This whole area was the cradle of Christianity.

Note "there was no longer any sea" probably means the Mediterranean.

It's all interesting to muse and speculate over, but remember this is the new Heavens and Earth, which will be vastly different to our current world. Even scientific laws could be different. 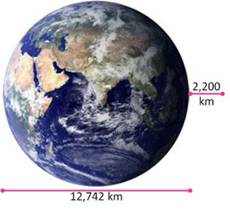 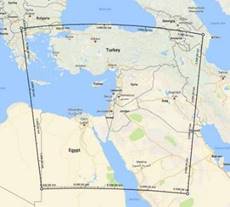