What does the Bible say about the future?
The Ezekiel prophecies

We live in amazing times, seeing ancient Biblical prophecies being fulfilled.  I don't think there's greater proof that the Bible is completely true.

As we look to Jesus’ soon return, we zoom in to the time since Palestine was restored to Israel with the Balfour declaration in 1917, late in World War One.  This is the promise prophesied in Ezekiel 36, that Israel will return, and the land will no longer be a toxic wasteland, but will become prosperous again.  This is not for Israel’s sake, who are still as ungodly as before, but for God’s sake, who has set Israel as the sign of his faithfulness.

The restoration of Israel as a nation under a ruler named David (ben Gurion) is just one of dozens of prophecies fulfilled in the past century.  The biblical narrative continues far into the future, gradually filling in details prophesied since the events of creation itself.

After 1948, when the Jews saw photos from the Holocaust, they saw the fulfilment of Ezekiel 37's valley of dry bones being brought to life.  Israel had been in exile since 70AD, and the land had generally been a wasteland.  Now they'd been restored to their ancient homeland from all over the world.  The ancient cities have been rebuilt and the land is thriving - just as Ezekiel wrote around 500BC, even naming their first Prime Minister. 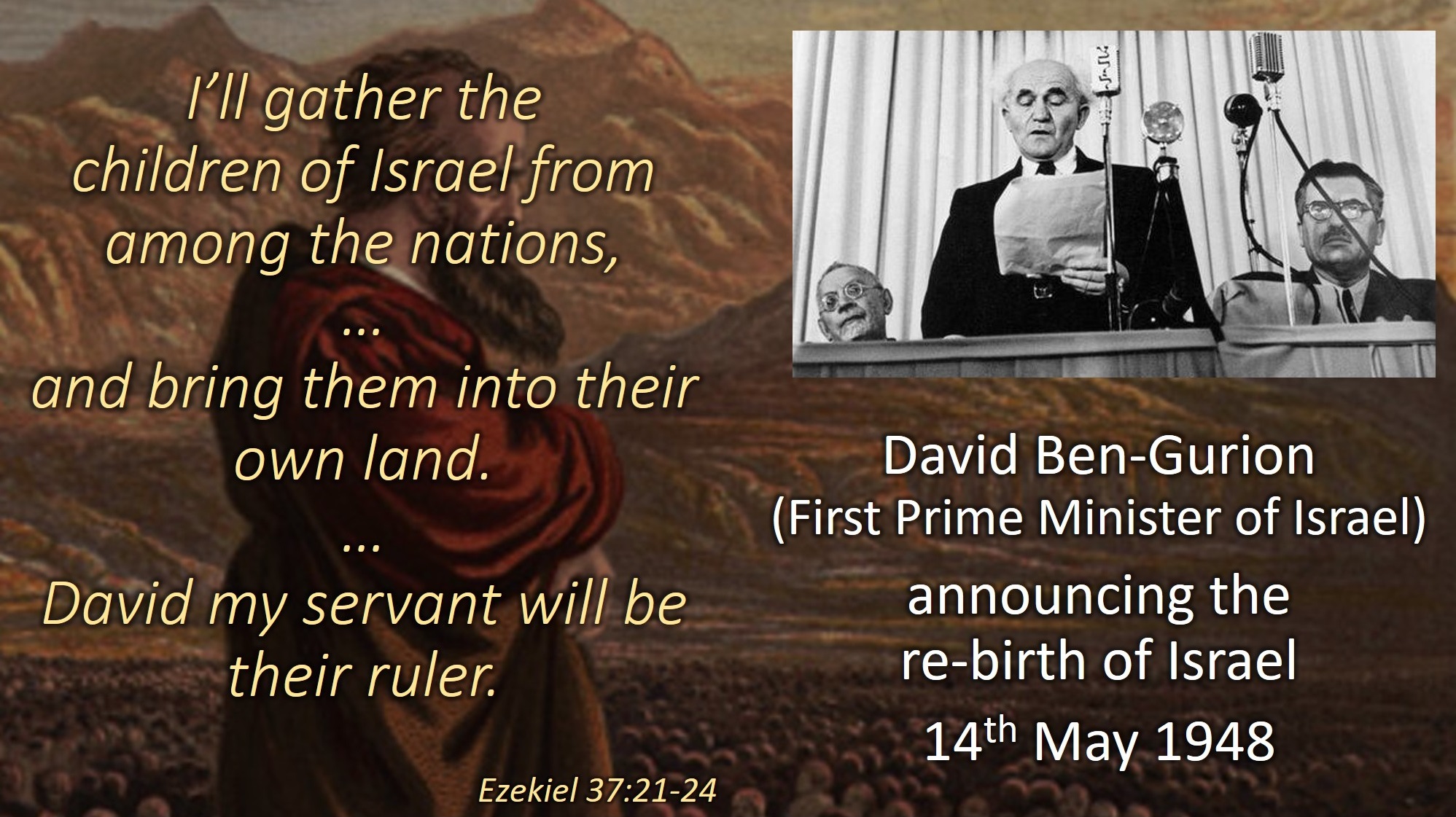 Ezekiel 37:21 Tell them, “The Lord God declares, ‘Look, I’ll take the children of Israel from among the nations, where they’ve gone, and I’ll gather them from every place, and bring them into their own land.  22I’ll make them a single nation in the land, on the mountains of Israel.  And one ruler will rule over them – they’ll no longer be two nations, nor will they ever be divided into two kingdoms again.  23They’ll no longer defile themselves with their idols, their detestable things, or any of their sins.  But I’ll rescue them from wherever they’re living, where they’ve sinned.  I’ll cleanse them, so they’ll be my people, and I’ll be their God.  24David my servant will be their ruler.  They’ll all have one shepherd.  They’ll live by my judgements and observe and follow my laws.’”