What does the Bible say about the future?
Pre-Tribulation

While Revelation 1-3 talks all about the Church, the Church isn’t mentioned during the judgements in chapters 4-20, which speaks of believers instead.  Many would become believers because of the Rapture and the ensuing judgements.

Since more than half the world will die before the middle of the Tribulation, and probably 90% before the final judgement, it’d be really hard to survive to a Mid- or End-Tribulation Rapture.

Adversaries of Pre-Tribulation claim it is a new idea invented by John Darby (1800-1882).  I get really upset whenever this claim is regurgitated to authoritatively end the discussion, particularly when combined with “Pre-Tribulation is the most dangerous teaching spread by false teachers in the Church today” e.g., https://ichthys.com/mail-dangers-pre-trib-rapture-false-teaching.htm.  Is this theory more dangerous than twisting scripture to appease the human philosophy of evolutionism, or teaching that sexual immorality can be blessed God?

Jude 1:4 Because certain people crept in secretly.  They were destined to punishment – ungodly people.  They turn the grace of God into an excuse for immorality and deny the only Lord God and our Lord Jesus Christ.

I think it’s dangerous to teach Christians to spend time and resources preparing to survive the Tribulation against all odds, rather than teaching everyday godliness in preparation of him taking us – whether it be by death or by the Rapture?

Such accusations are simply slanderous to other believers and are thereby more dangerous than the theory they denounce.  Such slanderous opposition suggests the Pre-Tribulation Rapture is true.

Pre-Tribulation seems to be evident in early Church teaching

The claim of its modern origins is debunked by Ken Johnson's book The End-times by the ancient Church fathers summarized on https://youtu.be/OUN1x6fSyi4.  He presents Irenaeus (AD 170), Hippolytus (AD 210), and Ephrem (AD 350) teaching a Pre-Tribulation Rapture.  Ken notes that they may be wrong, but I’m satisfied with the validity of the evidence presented.  He also talks about the Essenes teaching a Pre-Tribulation Rapture

When in the end that Church will suddenly be caught up from this, then it is said, ‘There will be Tribulation such as not been since the beginning, nor will be.’ The Complete Works of the Church Fathers, Kindle location 330695.

Page 25, Ephrem the Syrian’s The End Times – 2b Pre-Tribulation Rapture

For all the saints and elect of God are gathered, prior to the Tribulation that is to come, and are taken to the Lord lest they see the confusion that will overwhelm the world because of our sins.

By the heat he means the conflagration. And Isaiah speaks thus:
‘Come, my people, enter thou into thy chamber, and shut thy door: hide thyself as it were for a little moment, until the indignation of the Lord be overpast’ Isaiah 26:20

And Paul in like manner: ‘For the wrath of God is revealed from Heaven against all ungodliness and unrighteousness of men, hold the truth of God in unrighteousness’ Romans 1:18 The Complete Works of the Church Fathers, Kindle location 320788.

From https://christinprophecy.org/articles/the-origin-of-the-concept-of-a-pre-tribulation-rapture/, supports a Mid- or Pre-Tribulation Rapture: “Peter Jurieu in his book, Approaching Deliverance of the Church (1687)”

One of the early Church Fathers, The Shepherd of Hermas, writing in the early 2nd Century, makes an interesting observation about “the great Tribulation that is coming.” He says, “If then ye prepare yourselves, and repent with all your heart and turn to the Lord, it will be possible for you to escape it, if your heart be pure and spotless, and ye spend the rest of the days of your life in serving the Lord blamelessly.”

Pre-Tribulation has a bad reputation due to many cultish date-setters.  Around 1700, Sir Isaac Newton responded:

The time times & half time do not end before 2060. .... It may end later, but I see no reason for its ending sooner. This I mention not to assert when the time of the end shall be, but to put a stop to the rash conjectures of fancifull men who are frequently predicting the time of the end, & by doing so bring the sacred prophesies into discredit as often as their predictions fail. Christ comes as a thief in the night, and it is not for us to know the times and seasons which God hath put into his own breast. 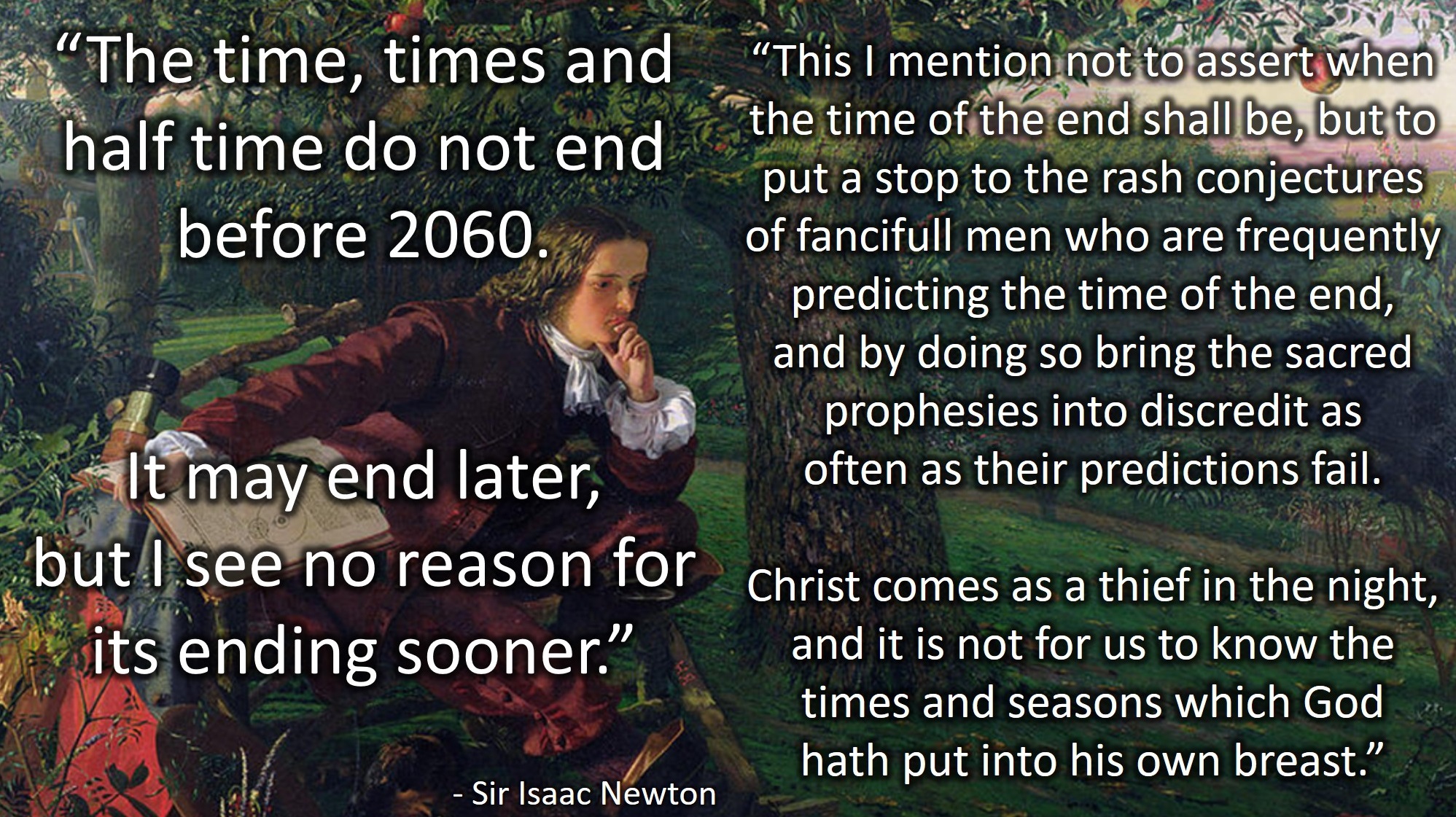 The Seventh day Adventists are infamous for numerous failed dates in their early years.  They’ve since matured a lot.  The Jehovah’s Witnesses and many other sects continue to put out dodgy predictions.  This is nothing new.  We read in 2 Thessalonians 2:2 that even in the early Church, people were alarmed at teaching that Christ had already returned.  There are many verses that speak of the suddenness and unpredictability of Christ’s return.

Matthew 24:36 But no one knows when that day and hour will be, not even the angels of Heaven, but only my Father.

1 Thessalonians 5:2 You’re completely aware that the day of the Lord will come like a thief in the night.

Revelation 16:15 Look out, I’m coming like a thief!  You’ll be blessed if you stay awake, staying clothed [in righteousness], so that you aren’t caught naked and exposed.

It’s right to call out the date setters.  But this argument against the Pre-Tribulation Rapture corners the mid-tribber or end-tribber into a similarly predictable time.  Pre-tribbers decry the violation of the “doctrine of imminence”.  However, this doctrine is sufficiently important regarding our death that it need not apply to the Rapture also.  I find the use of the word “doctrine” being used just as emotionally as the words, “heresy” and “false prophet”.

Opponents accuse pre-tribbers of teaching escapism.  However, this denies the comfort this has brought to persecuted generations, bearing undertones in Negro spirituals such as Swing Low Sweet Chariot.

1 Thessalonians 4:18 Therefore comfort each other with these words.

These concerns don’t disprove the underlying theory but are exploited and exaggerated by opponents to emotionally vilify it.  On the other hand, denouncing this possibility takes away a hope that sustains many through troublous times such as a friend of mine who is in prison due to the conspiring of his ex-wife.

Steven was comforted by the idea of Christ’s return for him at his martyrdom.

Acts 7:56 and said, “Look!  I see the heavens opened and the Son of Man standing on the right hand of God.”

My grandad seemed to have a vision of Jesus coming for him on his deathbed as his face lit up and he lifted his hands as if to say, “Beam me up Scotty”.

The argument of escapism can be reflected back on the fear of not being ready.  A Pre-Tribulation Rapture would be an incredible wake-up call to many lukewarm Christians – like how a brush with death provokes many to get right with God.

Additional arguments for a Pre-Tribulation Rapture

Genesis 29:27 Complete Leah’s wedding week, and we’ll also give you Rachel for another seven years of service to me.

Isaiah 26:20 Come, my people, enter your chambers and shut the doors behind you.  Hide yourself as it were for a little moment until the tribulation is past.  21Because look, the Lord comes out of his place to punish the inhabitants of the Earth for their sins.  The Earth will also uncover her blood and will no longer cover the murdered ones.

I’ve grown up with the Pre-Tribulation Rapture theory and contemplated this throughout my life.  I’ve tried getting my head around other theories but found them mostly presented as “Why I don’t like the Pre-Tribulation theory”, rather than a theory with its own merits and modelling with Biblical precedents.  I appreciate the anxiety associated with the prospect of suddenly losing so many loved ones, finding we weren’t as good as we thought.  However, this should be no different to the general prospect of death.  This is what’s important, and whatever happens, it’ll all pan out.