What does the Bible say about the future?
The Mark of the Beast

Throughout the ages, people have speculated on the Mark.  Often this is used to demonize a political foe such as Nazi Germany.  They sought to dominate the world, so everyone would have to pay using the Deutsche Mark.  Since then, every new banking technology has been it. 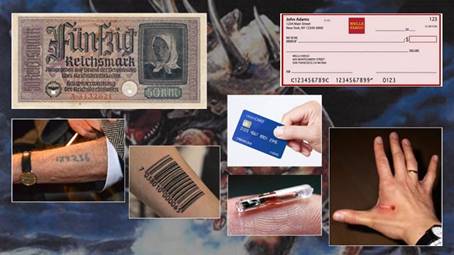 In the eighties, a tattooed bar-code was all the rage – these had a calibration stripe at both ends, and in the middle, representing the number 6.  Sometimes a 9 but the “wise end-timesers” saw right through that ruse.

Soon after that, credit cards were the cool thing, with everyone carrying a magnetic strip, and later a computer chip around in their pocket.  Credit cards replaced the anonymity of cash since every transaction could be traced.  A great computer building was nicknamed “The Beast”, which really sparked imaginations.

Each of these met resistance as people feared government control and were gradually accepted as ok.  People’s incessant fear of change has been fueled with religious superstition.

Microchip implants are the latest “tool of the Devil”.  These provide passive tracking of the population, fulfilling secular fears of “Big Brother” from George Orwell’s book “1984”.  In the future, it’ll be nano-implants – microscopic machines that can regulate your health and self-replicate.  Sensationalists will project the potential of turning people into evil androids like the Borg of Star Trek fame.

There’s no mention in scriptures of a global banking system or currency.  This is pure speculation.  The Mark is the Beast’s number or name – not each person’s personal number.

Scriptures don’t talk about tracking people.  These days it’s just not necessary to chip every person to track them.  Google and Apple are already tracking our phones, which we can’t live without.  And China tracks its citizens with facial recognition.  And there’s many other forms of biometrics.

The mark of the jihadi

An interesting theory from ex-terrorist Walid Shoebat is that St John drew what he saw – looking like 3 Greek letters, but was in fact the insignia from an Islamic arm/headband like ISIS wear.  Two characters look like Arabic: “In the name of Allah” and the last, the crossed swords of Islam. https://youtu.be/Rs_09o5j_pY  The word “hand” can also be translated arm.

Daniel 11:37 “He will show no regard for the gods of his ancestors” rebuts an Islamic Antichrist – or Jewish or “Christian”.

I love how this theory reveals that the Mark would be a visible sign of allegiance to the emperor. Consider during the Holocaust, how the Jews had to wear the Star of David. This excluded them from society. They were also tattooed with their prison number. The Nazi’s wore their armbands signifying their worship of the party and the Fuhrer.

Today, Jihadi groups wear their mark, on the arm or their forehead.  This is how people will worship the Beast - by bearing his Mark.  Those who don’t have the Mark will be cut off from society as traitors and hunted down by the whole world to be killed.

The Mark of the Beast is a sign of worship

Speculators spread their terror of being dammed by unknowingly taking the Mark of the Beast.  They omit the context that it is an intentional act of worship as was demanded of various historical emperors.

Revelation 14:9 Then a third angel followed them, saying with a loud voice, “If anyone worships the Beast and his image; and receives his mark on his forehead or on his hand, 10they’ll also drink from the wine of God’s punishment, which is poured out full strength into the cup of His fury.  They’ll be tortured with fire and brimstone in the presence of the holy angels and in the presence of the Lamb.  11The smoke of their torture rises forever and ever.  Those who worship the Beast and his image, and whoever receives the Mark of his name, will never rest day or night.”

Revelation 15:2 I saw something like a sea of glass mixed with fire, and those who have the victory over the Beast, over his image, over his Mark and over the number of his name, standing on the sea of glass, having harps from God.

Revelation 19:20 The Beast was taken, and with him the False Prophet that performed miracles on his behalf, with which he deceived those who’d received the Mark of the Beast, and those who worshipped his image.  Both were thrown alive into a lake of fire burning with brimstone.

Revelation 20:4 I saw thrones, and those who sat on them, and they were appointed to judge, and I saw the souls of those who were beheaded for telling people about Jesus and the word of God.  These hadn’t worshipped the Beast or his image, nor received his Mark on their foreheads or in their hands.  They lived and reigned with Christ for a thousand years.

I would advise against just receiving his Mark and pretending to worship to avoid persecution.  However, you’re not going to be damned to Hell by taking a chip in your hand for modern security concerns – no more than signing up for a credit card or paying with a coin bearing the Queen’s image.

To be honest, I’m superstitious about this and always offer my left hand to receive an admission stamp etc.  If faced with the necessity of being chipped, I’d feel really uneasy, but would consider using my left hand.  If they won’t accommodate my superstitious religious concerns, then there’s a problem.  I mean why insist on it being the right-hand? – that would be suspicious.  Allowing a forehead option would just be weird and impractical.

The Mark of the Beast requires the Beast

The Mark of the Beast cannot happen without the Beast.  The world emperor will be worshipped by bearing a mark of allegiance on the right hand or the forehead.  But he’ll not be revealed until the Restrainer of 2 Thessalonians 2:7 is removed. 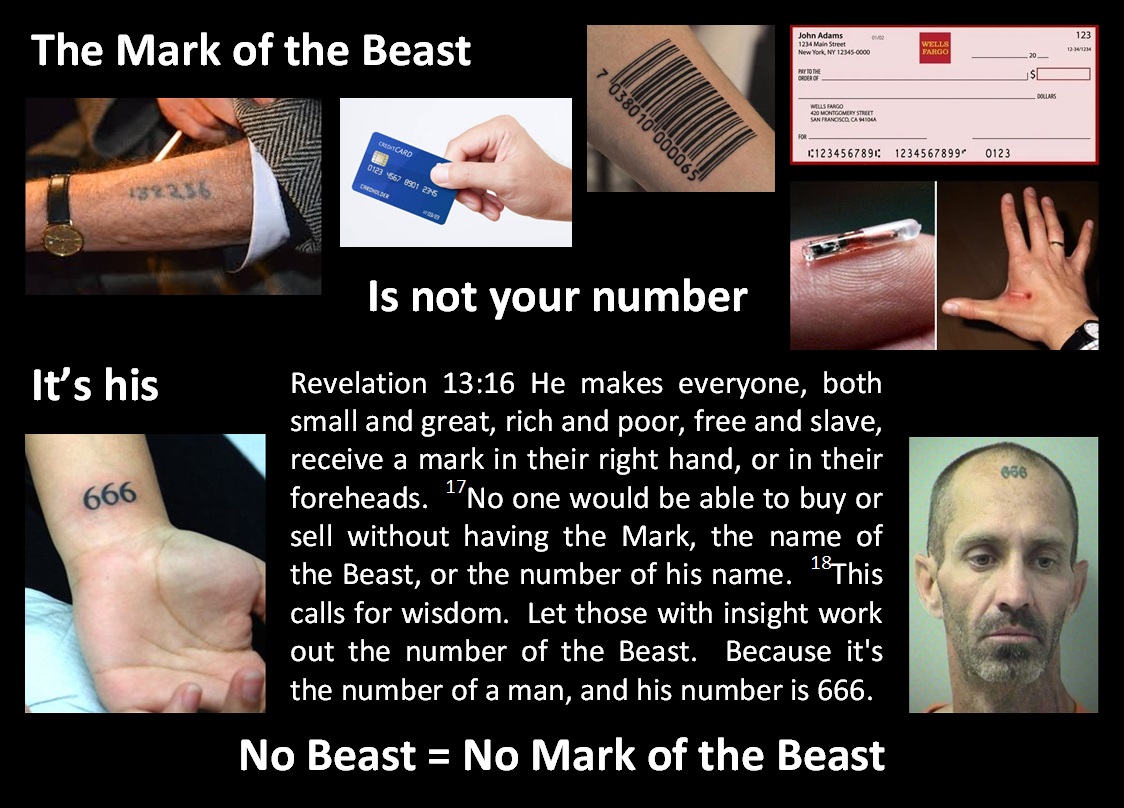 Some early Church fathers taught that the Antichrist’s name would add to 666 in Greek, where letters have numeric values.  They provided a list of common names as examples, demonstrating that just because their name adds up doesn’t mean they’re the Devil.  Many use such methods to slander someone as working for the Devil.  The cool kids in English add each letter’s numeric position multiplied by 6 e.g. A=6, B=12 …. This produces some interesting coincidences such as “Mark of Beast” and “Bio Implant”.  The ‘helpful’ people at http://www.angelfire.com/ok5/l-jackson/GCode.html have written a calculator such as I programmed as a teenager.  Other coincidences occur around 444 (Jesus) and 888 (the trinity).

The Mark of the Beast is his number - not yours.  It’ll be a visible mark, proudly worn on the right hand or forehead.  After the world emperor enforces a world-peace treaty with Israel, and ruling the world for 3.5 years, the Mark will enforce worship of him, or be cut off from society.  A tattoo is sufficient to fulfil scriptures. 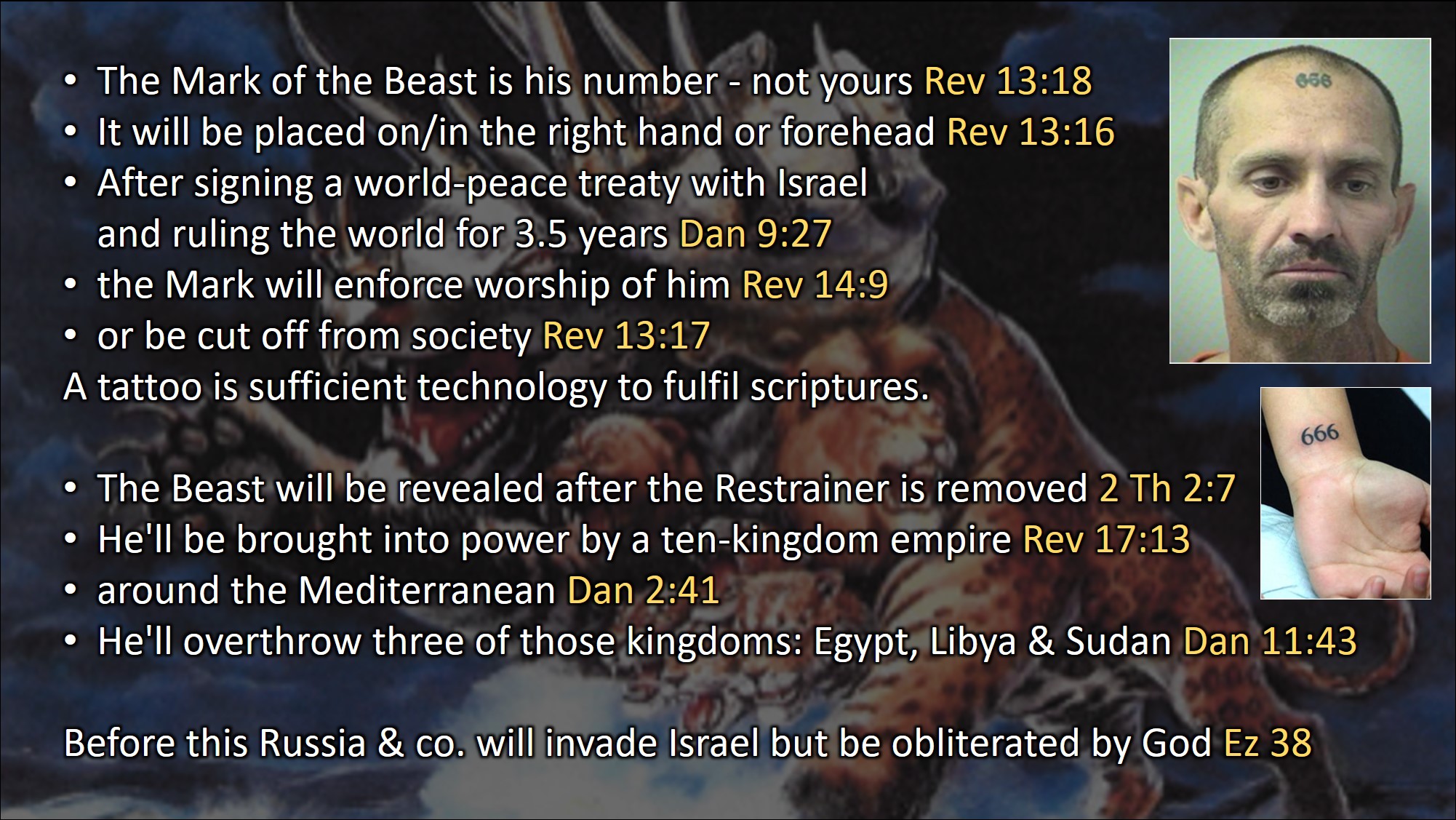 The Mark of the Beast is primarily an outward sign of worship and allegiance; but could also be incorporated in commerce.  When the time comes, this will be an additional confirmation that this is not the Messiah, and we should not submit ourselves to worship him, particularly by receiving his Mark, even if this would cut us off from society.  Remember that God provided for the Jews in the desert for 40 years.  Jesus fed thousands from a few loaves.  Therefore, God will provide for believers at this time.

Matthew 6:33 Seek the Kingdom of God first, and his righteousness.  Then all these things will be provided for you.