What does the Bible say about the future?
False prophets and the Apostacy

Along with the geopolitical shift resurrecting an ancient empire, we can expect a rise in false teachers, who reinterpret the obvious fulfillment of Ezekiel 38.  Some will lead people astray into religious legalism. Others will lead people in open defiance of God with explicit Satan worship, including the celebration of sexual corruption and torturous sacrifices that have been long forgotten.

Jesus warns us that many false prophets will lead many astray.  This has always been the case.  Elijah felt like he was on his own against 450 prophets of Baal.

2 Peter 2:1 There were also false prophets among the people, just as there’ll be false teachers among you.  They’ll subtly introduce destructive heresies.  They even deny the Lord that rescued them and bring swift destruction on themselves.  2Many will follow their evil ways, causing the way of truth to be smeared.  3They’ll exploit you through greed and tall tales.  Their judgment won’t be far away, and their punishment won’t rest.

19While they promise freedom, they’re enslaved to corruption.  Because a person is enslaved to that which overcomes them.

However, many seem to teach that every person who seems to be like a prophet is a false prophet.  But how can you have false prophets when there aren’t any real ones?

Remember how prophets like Jeremiah were abused because they spoke the unpopular word of God.  We’ll know false prophets by their fruit. 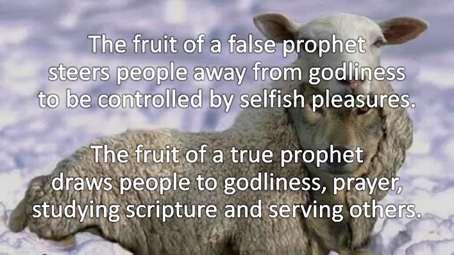