What does the Bible say about the future?
Matthew 24 commentary

1. The disciples marvel at the impressive architecture of the second temple.

This was built by the Jews returning from exile in Babylon around 516BC, as recorded in the book of Ezra.  In the century before Jesus, Herod the Great greatly enhanced the temple.

2. Jesus predicts the temple will be destroyed, with not one stone left upon the other.

This was fulfilled in 70AD when Titus destroyed the rebellious city and its temple.  https://youtu.be/y741QbT1YEo (45min) documents the siege of Jerusalem.  The fire in the temple melted the gold, so the Romans took every stone apart to get at that gold.

3. The disciples came to him privately with a flurry of questions:

4. Jesus’ immediate response is, “Watch out that no one deceives you.”

There’ll be lots of deception about the future.  Some is intentional and nefarious, some is innocent and well-intended, but nevertheless deceptive.  We must therefore carefully examine every teaching and idea against scripture – particularly on this topic.

5. Many will proclaim themselves as the savior and deceive many.

The Jews were looking for another Messiah like Judah Maccabee who overthrew the Greek occupation.  Jesus obviously wasn’t going to lead them to military victory, so they had him killed.  In Acts 21:38, Paul was confused with an Egyptian who led a revolt.  Many died in the Siege of Jerusalem in 70AD.  In the fortress of Masada in 73AD https://youtu.be/11iPrDv8aBE (16min).  In 132AD Bar Kochba claimed to be the Messiah https://youtu.be/FUNurxGFGjE (5min).  In fact, Jewish-Roman history is full of “Messiahs” https://youtu.be/pJOM3aLXhc4 (10min).

Today, we sometimes hear about sect leaders, some claiming to be the Messiah/Christ.  Often this doesn’t end well.  Then there’s charismatic leaders like Napoleon and Hitler who led their people on the promise of a new world order.  The Antichrist will follow this pattern, deceiving the world with claims of being their savior.  He’ll claim to be Jesus Christ, the Jewish Messiah, the Muslim Mahdi, the Hindu Vader – the bringer of world peace.

6-8. Don’t worry about wars or natural disasters or the prospect thereof.

We’re not going to be obliterated by aliens, artificial intelligence, a mega-virus, or climate change.  Although these might be problematic, don’t let these bother you.  These are just the world doing its thing under the weight of our sin and getting ready for Jesus to return.

9. Then you’ll be persecuted and killed in every nation.

We’ll have to get to every nation first.  This disproves claims that 70AD was the Tribulation and we’re now living in the millennial kingdom – besides the fact that Jesus is not the world emperor with a temple the size of a city center.

10-13. Then many will turn away from Jesus and hate each other

There’ll be many making dodgy predictions about the future.  Some will convince many of impending doom.  Maybe this can be avoided with three easy payments of $6.66.  Others will preach a God too good to bring wrath on the Earth, which he foretold throughout the Bible.  But those who hold on to the entire truth of God’s Word will be saved.

14. The gospel will be preached in every nation, then the end will come.

Some organizations focus on this mandate.  They see much of the world’s population has not yet been reached with the Gospel.  So, we’re still a way off this being fulfilled.  Therefore, the end can’t come yet.  However, this could be fulfilled during the Tribulation with the 144,000 Jewish evangelists. 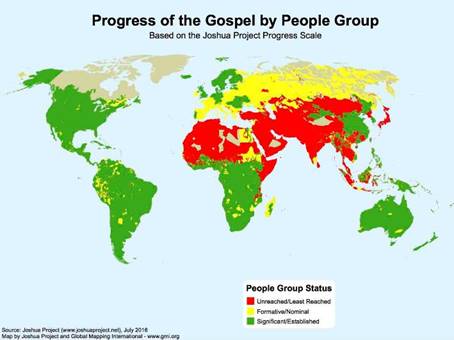 While the red areas of the world are poorly reached with the gospel, often 1-2% of their populations are Christian.  Although many tribes are unreached, we could debate that this is fulfilled.  The gospel has certainly spread to the ends of the Earth, with 31% of people identifying as Christian. 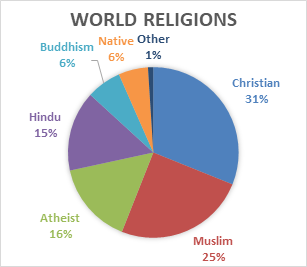 15-20. When you see the temple desecrated, flee Judea, don’t even stop for essentials.

When this was seen in 70AD, Christians heeded this warning and fled the destruction of Jerusalem before the Roman armies encircled the city, leading to the massacre of its occupants.

21-22. For these will be the most terrible times the world will ever see.

The book of Revelation describes events far worse than 70AD, dwarfing the plagues on Egypt before the Jewish exile – on a global scale.  Verses 15-20 will really be fulfilled during this time.  I speculate over 95% of the world’s population will be destroyed during these seven years.  People will only survive because those days are shortened.

False Messiahs will perform amazing miracles that’ll deceive the whole world, except it’s not possible to deceive the “sheep” who intimately know the voice of God.

25-28. Jesus’ return will be as obvious as lightening across the sky.

You don’t need to follow some dude out into the desert or some secret place.  Even in such cases, Jesus’ presence would be like a carcass in the wilderness – you might not see it, but you’d know it’s there because you’d see birds circling above.

29-30. At the end of the Tribulation, Jesus will return in the clouds in great glory.

The sky will be darkened, and the world will grieve at the realization of his coming.

31. He’ll gather his chosen ones from throughout Heaven with a trumpet blast.

Those who believe the Rapture occurs at the end of the Tribulation quote this as proof – that Jesus won’t come secretly.  But Jesus is not gathering the saints from the Earth, but from Heaven.  Jesus’ mission on the cross doesn’t mean he wasn’t born 30 years earlier – that was all his first coming, which encompassed many different prophecies over his lifetime.

Just as the fig tree’s budding proclaims the coming summer, these signs will proclaim Jesus’ coming, which will precede the passing of that generation.

Many read into the budding of the fig tree as a prophesy of Israel’s rebirth (budding) in 1948.  Hence “88 reasons Why the Rapture Will Be in 1988”.  Then, having missed this, 2018 was all the rage, as it was 70 years after Israel became a nation.  Now I guess we should focus on Jesus coming before the last 1948 baby dies.

But read this in context!  “After these things…”  What things?  The Tribulation.  In hindsight it seems like we’ve used this verse to justify another date-setting theory.  I think we could equally say “When you see the cherry trees blossom, you know summer’s coming.”  i.e., these are the signs, and when you see them, you know that Jesus is coming to put an end to evil authorities ruling the world.

36. No one knows the day or the hour, neither angels, nor Jesus, only God the Father.

This could be referring to an idiom describing Rosh Hashanah, the feast of trumpets, the only Jewish festival that starts on a new moon.  This begins when two witnesses see the first sliver of the moon, which could be one of two days, depending on weather and astronomical circumstances.

For this reason, many expect the Rapture to be on this festival.  Maybe.  But more likely, this heralds Jesus’ return in glory.

However, this correlates with many other verses about Jesus coming like a thief in the night at a time when no one expects.  This suggests it won’t be Rosh Hashanah.  Whether this refers to the beginning or end of the Tribulation, it can be read either way.

37-39. Just like in Noah’s time, destruction will come suddenly, while people are going about the lives as usual.

If Jesus is still talking about his glorious return, I struggle to see how people could be going about life as usual – not with 95% of the world dead following an onslaught of apocalyptic world-wide disasters over seven years.  I think this talks more about the Rapture.

“Two in the field”, “two at the mill”, and in Luke 17:34 “two in bed”, some note a day activity, and evening activity, and a night activity – all at the same time.  This curiously supports the notion of time zones, which we expect ancients to be oblivious of.

It’s debated whether the righteous or the wicked are taken – it could refer to the Rapture of the righteous, or the obliteration of those allegiant to the Antichrist at the end of the Tribulation.

42. Therefore remain vigilant – you don’t know when Jesus will come.

So, however you see things, it’s important that you’re vigilant and living a life in constant expectation of his sudden coming.

43. If the master had known when thieves would come, he’d have been ready.

Many will be struck with regret when Jesus comes.

44. He’ll come suddenly for each of us – at no further warning.

God will reward those who are found doing their appointed work – whether that is leading a church or a family in righteousness, studying for missions or a lifetime sustaining a righteous family, or raising the next generation of Godly servants.

48-51. But if we disregard his coming and abuse others, God will destroy us.

I see so many Christians slagging off about another part of Christ’s body – essentially because they’re different.  They might have a different interpretation of scripture, or worship differently.  If they’re essentially preaching John 3:16 in its entirety, they’re God’s servant.  It doesn’t matter if they sing pop praise, hymns, or nothing.  It doesn’t matter if they perform miracles or not.  It doesn’t matter so much what they call themselves.  If they preach Jesus is God who became human to cover our sins, and we need only believe this to be saved, and to live a life changed by this fact.  If they preach this, they are doing God’s work.  If they slander any of those who do, they’ll be thrown into Hell with the wicked.

Remember the guy executed next to Jesus, he recognized Jesus’ deity and his own sin, and asked Jesus to remember him.  Jesus replied, “Today you’ll be with me in paradise”.  He hardly knew a thing about theology, he was a criminal, but he stood up for, and turned to Jesus in his dying moments.