What does the Bible say about the future?
How bad can things get?

This question is often stated rhetorically to prove that the end of the age is imminent.  The answer, however, argues that the end of the age could be generations away.  The evils of today’s society are nothing compared to ancient times.  Well known examples of morally depraved empires were insufficient to require being wiped out by God – unlike the less familiar situations of Sodom and Noah’s generation.  God seems to only step in when a society is beyond redemption.  The incredible extent of how bad things can get proves that we’re far from the end of the age.

The majority of people in the Roman Empire were slaves.  Politicians kept harems of boys for their pleasure; when they weren’t sleeping with their sisters, mothers, and daughters.  One even married his gender-reassigned slave.  Abortion was commonplace by leaving unwanted babies on the streets to die.  Pagan temples were central to society, centred around ritual sex with shrine prostitutes and ritual drug use.  The resort city of Pompeii perhaps overstepped God’s patience, incurring their volcanic destruction.  Gladiatorial death matches were popular sporting attractions.  The population were controlled with the threat of a bloody death by crucifixion, which would take days for a person to torturously succumb to asphyxiation.

I’m unaware of any country today that lives up to this level of depravity.  Most governments actively seek to suppress slavery, public executions are rare, and death matches are little more than underground rumours.  Incest is generally illegal, as are paedophilia, polygamy, and bestiality.  Even homosexuality is uncommon globally.

In spite of Rome’s depravity, God saw fit to withhold his judgement of them, because they could be redeemed, and they were.  Since then, Europe has become the powerhouse of Christianity – for good and for bad.

Nineveh was so depraved during the time of the prophet Jonah, that he ran away from God rather than risk them repenting at his warning of God’s destruction.  Assyrian Warfare was renowned for their brutal devastation of cities that resisted them.  Their reputation for terrorism inspires jihadi groups like ISIS in the same area today.

“I built a pillar at the city gate and I flayed all the chief men who had revolted and I covered the pillar with their skins; some I walled up inside the pillar, some I impaled upon the pillar on stakes.” https://www.ancient.eu/Ashurnasirpal_II

During Hezekiah’s reign in Jerusalem, the Assyrian commander threatened the people:

2 Kings 18:27 But Rab–Shakeh said to them, “Did my master only send me to your master, and you, to speak these words?  Didn’t he send me to the men who sit on the wall, so that they’ll eat their own shit, and drink their own piss with you?” 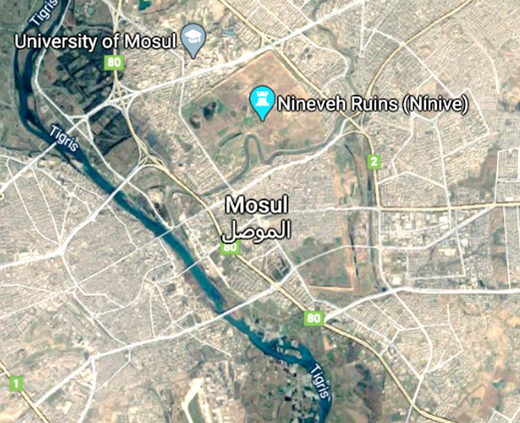 Today, military operations are governed by the Geneva convention.  Such actions are condemned as war crimes, even the indiscriminate collateral damage of civilians, such as occurred during the bombings of World War II.

As we saw with Jonah, the city of Nineveh respected God’s warning and repented of their evil.  The modern city of Mosul has been home to Christians throughout the ages, even though the area is controlled by Islam.

Genesis 19 alludes to Sodom’s wickedness.  In Genesis 18, Abraham negotiates with God that if only 10 righteous people are in the city, he’d spare it from destruction.  When the angels check it out for themselves, we see their absolute hatred for strangers expressed in every man of the city pounding on Lot’s door, demanding to gang-rape them.  Every man conspiring against these strangers supports the description beginning in Jasher 18.  Their judges made up rulings to convict strangers, and their municipality organized public orgies for everyone in the region four times a year.  They starved strangers to death by refusing to sell them food, and those who took pity on them were sentenced to torturous death.

But God found that Lot was godly and rescued his family from the destruction.

Genesis 6 alludes to how fallen angels interbreeding with people had corrupted human genetics.  The whole world was filled with violence that God would give them another 120 years to turn from their wickedness before he’d destroy the world with the flood.  The Book of Enoch details how these angels’ fell and corrupted humanity with their mixing of genetics.

But God found Noah was godly and rescued his family from the destruction to repopulate the world.

From history, we see that a prevalence of abortion, drugs, paedophilia, and pagan worship are not enough for God to step in to intervene.  These are insufficient to signal the coming end of the age.

How bad can things get?  If you must ask, I’ll share my thoughts:  Most people will be slaves.  Marrying children or animals will be celebrated as will torturous child sacrifices.  Police and judges in every city will make up rulings to oppress strangers to death.  “Christmas in the Park” will be replaced with “Orgy in the Park”, organized by our city councils four times a year, where the men will do nothing when they see their own virgin daughters and wives having sex with other men, in fact they’ll celebrate this.  One in four men will have been gang raped.  Not only will bloody violence be rampant but will be organized by the government.  Gladiator death-sports will be popular entertainment for the whole family.  Those who speak out against government immorality will be publicly tortured to death.  Medical ethics, instead of limiting genetic experimentation, will encourage the ultimate creative diversity.  This will bring about various human-alien hybrids, bringing to life Greek mythology, including giants and chimeras.  Then the Antichrist will come, and things will get really bad.  I’m sorry you had to ask. 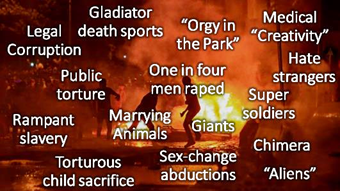 But God will find in this world many people who love him and teach godliness.  These, he’ll rescue before he brings destruction to end this wickedness.  During this destruction, many will turn to godliness, even while most people will recognize God’s power, only to curse and blaspheme him.  Then Jesus will come to restore this world and establish peace through his world-wide Empire.

As the bad gets badder,
expect the good to get gooder.