What does the Bible say about the future?
The greatest earthquake

At the end of the Tribulation will be the greatest earthquake ever.  This will reshape the Earth.  I was wondering if this would reshape the land into a single continent with Jerusalem in the center, restoring the Earth to before Noah’s flood.  I imagined taking the current world map with the Americas squashed onto Europe and Africa.  This thought took me on an interesting journey.

Revelation 16:17 Then the seventh angel poured out his bowl into the air.  A great voice spoke from the temple of Heaven, from the throne, saying, “It’s done.”  18There were voices, thunder and lightning, and there was a great earthquake – greater than any since people were upon the Earth – such a mighty earthquake and so great.  19The great city was divided into three parts, and the cities of the nations fell.  God remembered great Babylon, to give her the cup of the wine of the fierceness of his anger.  20Every island fled away, and the mountains were no more.  21Huge hail fell from the sky, every stone weighing about 50kg.  People slandered God because of the plague of hail.  Because it was so great. 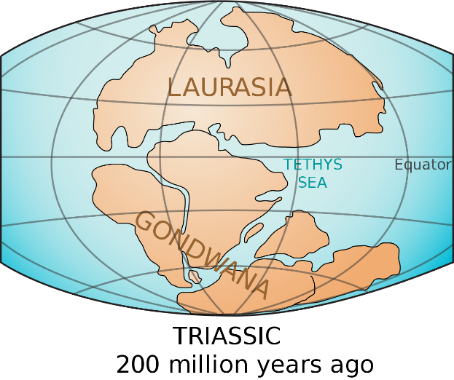 Creation scientists and evolutionary scientists agree that there was once a single super-continent.  They disagree on when.  The Bible records the eyewitness account of Noah, documenting catastrophic change over one year.  Evolutionism prefers speculations over billions of years favoring pagan religions.

I thought the super continent was called Gondwanaland.  This is in fact one of two continents, along with Laurasia.  Gondwana contains south America, Africa, Arabia, India, Antarctica and Australia.  Laurasia contains North America, Europe, and Asia. 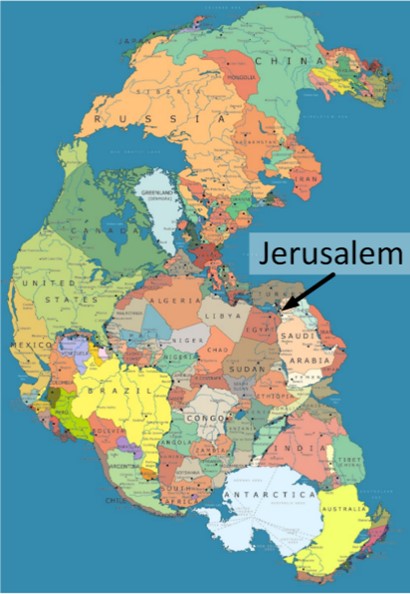 This was all pre-dated by Pangea in the Paleozoic and Mesozoic eras around 335 million years ago by evolutionary storytelling.

In Pangea, Jerusalem is sort of in the middle, but on the eastern side.

As we go back in time, the original continents are more and more squashed out of shape.  Also, the continents don’t just suddenly drop off into deep ocean, so their shape depends on ocean levels.

Pangea is theoretically predated by another super-continent called Rodinia, around a billion years ago according to evolutionists.  Speculations on its shape are murky, beyond any reasonable consensus in a Google image search.

I couldn’t find any reasonable evidence to support my hypothesis of the shape of the Earth before the flood.

However, I won’t let facts dampen my amazing revelation ;-).  I was more interested in the shape of the Earth after the catastrophic earthquake of Revelation 16 – one even greater than that of Noah’s flood.

Revelation 16:20 Every island fled away, and the mountains were no more.

In searching images of ancient supercontinents, I stumbled across Pangea Ultima, which projects continental drift 250 million years into the future: 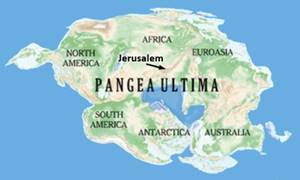 Curiously, Jerusalem is near the center of this.  But this doesn’t fit the biblical description devoid of immense mountains.

Here’s my crude concept I’d envisaged of the current continents squashed together again.  I expect significant deformation similar to the image of Pangea.  Given an infinite God, anything’s possible.

Putting this into the timescale of the Tribulation, I imagine an earthquake occurring over days to weeks, bringing the continents together and flattening the mountains.  “Every Island” could refer to the Americas no longer being separate; and could imply the flattening of pacific volcanic islands such as Hawaii, Fiji, Samoa, which would dissolve into the depths of the ocean.

As a resident of Christchurch, I’m an “expert” in earthquakes ;-).  Whenever I feel an earthquake, I begin counting.  The duration of an earthquake is related to its magnitude.  My crude measure is: 30 seconds = 6-pointer.  60 seconds = 7-pointer, 2min = 8, 4min=9, 8min=10.  Depending on the strength of shaking I experienced, I guess its distance.  On 14 November 2016, an earthquake shook me for over a minute, but not strong enough to knock things over.  I guessed a 7-pointer hundreds of kilometers away.  This was the “Kaikoura earthquake”, 100km to the north.  In 2008, the 8-pointer Sichuan earthquake in China shook for 2 minutes.  The 9-pointer 2011 Sendai earthquake lasted six minutes.

In our earthquakes, I observed how the ground around my parent’s house stretched and levelled out into the surrounding river loop.  That solid ground is not so solid in an earthquake.  I find it very reasonable that an earthquake, which is greater than any other, could shake volcanic Islands like Hawaii below the ocean surface, like even the grandest sandcastle vanishes with the incoming tide.

The following scriptures may also describe this earthquake.

Isaiah 11:10 On that day a descendant of Jesse will stand as a symbol of the people.  The nations will turn to him, and his place of rest will be glorious.  11On that day the Lord will determine for a second time to recover his people who remain: from western Syria, Egypt, upper Egypt, Sudan, Jordan, Iraq, Syria, and overseas places.  12He’ll set up a sign for the nations, gather the outcasts of Israel, and gather the dispersed of Judah together from the four corners of the Earth.  13Northern Israel’s envy will depart, and Judah’s adversaries will be cut off.  Northern Israel won’t envy Judah, and Judah won’t trouble Northern Israel.  14But they’ll swoop down on Gaza to the west.  Together, they’ll plunder the people of the east.  They’ll annex all of Jordan who’ll submit to their governance.  15The Lord will dry up the Gulf of Suez, and with his mighty wind he’ll wave his hand over the Euphrates to break it into seven streams, so that people can cross it without getting their feet wet.  16There’ll be a highway for those who remain of his people in western Syria – just like it was for Israel on the day that they came up out of the land of Egypt.

Micah 4:1 In the last days the mountain of the house of the Lord will be established as the highest mountain, and it’ll be raised above the hills and people will stream to it.  2Many nations will come and say, “Come. Let’s go up to the mountain of the Lord, and to the house of the God of Jacob, and he’ll teach us his ways, and we’ll walk in his paths.”  Because the law will come from Zion, and the word of the Lord from Jerusalem.

It’s been interesting finding out about Pangea and the greatest earthquake.  I can’t find biblical support for the Earth being reshaped back into one continent, nor against.  The same goes for Jerusalem being at the center of the world geographically – before Noah’s flood or during Jesus’ millennial reign.

It’s important when we receive revelation that we proof it – firstly against the Bible, then against historical and scientific sources.  I do get over-excited about something that comes to me, and sometimes divulge these prior to appropriate scrutiny.  This process is important.  It is often a significant journey in itself – as we meditate over and explore revelation of God’s infinite wisdom, power, presence, and love for us.