What does the Bible say about the future?
Understanding the beginning

End times prophecy is as old as creation itself.  In Genesis 3:15, God revealed to Adam and Eve that her offspring would crush the authority of evil.  Extra-biblical sources claim that God revealed to Adam that the Earth would be destroyed once by fire and once by water.  Such sources suggest that the writings of Adam through to Noah were carried on the ark and passed down to Moses who compiled these into Genesis.  After the dispersal of languages at Babel, I believe the descendants of Eber, the Hebrews were sole custodians of this written history, leaving other cultures' oral history to degrade into fanciful myths.  But these still combine to witness to the truth of the written Word of God.

The Bible is the most reliable source of history, but other sources collaborate and expand upon the details thereof.  Claims of the Bible being full of contradictions generally arise from inaccuracies in the King James translation or prove that the witnesses have not conspired their account.  The general details withstand historic and scientific scrutiny, and more importantly, provide a cohesive description of God's nature from Genesis to Revelation.  I find there is very little new in the New Testament - just clarifications of what was established in the writings of Moses and the restoration of our original created relationship with God.

Those who compromise any aspect of biblical history bind themselves to an imperfect method of interpretation, whose predictions will fail.  Those who disregard history often twist already fulfilled events into their observations of the present to make failing predictions.

When we immerse ourselves in studying the Bible, our experience will follow what we read as it builds up our faith. 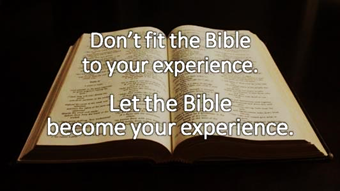