What does the Bible say about the future?
Prepping

Preparation for natural disaster is vital.  Be aware of the risks of your area and prepare suitable shelter and provision in case disaster strikes - canned food, water, tents, off-grid cooking, a storm cellar, a nuclear bunker, an evacuation route for tsunami, bush fire etc.  The festival of tabernacles (Sukkot) has prepared the Jews well for numerous persecutions they’ve endured.  The great kiwi annual camping trips are similar.  When Christchurch's earthquake happened, people just grabbed out their tents and BBQs, and dug a loo in the back yard.

While a zombie-apocalypse doesn’t fit the Bible, there’s the very real possibility of plague, as we’ve seen with the COVID pandemic.  In the late 1800's electricity was wiped out by a solar storm, a nuclear Electro-Magnetic-Pulse could also destroy all electronics over thousands of kilometers.  So, it’s prudent to be prepared.  We may also need to prepare for civil war and political uprisings as per historic realities.

However, if you think you can store up supplies to avoid having to take the Mark of the Beast, you’ve not understood that the entire world will be hunting you.  We don’t need a chip to be monitored.  Cities already monitor citizens by facial recognition and within a few months the world’s industries could produce hunter-killer drones targeting those who oppose the beloved world emperor, wherever they might be hiding.  This is how the Image of the Beast will ensure everyone worships the Beast by taking his Mark.

The Mark of the Beast is totally unnecessary to control the population - hence its association with worshipping the Beast's image.  It's about submitting one's allegiance to the Beast and worshipping him.

2 Peter 2:9 The Lord knows how to save the godly out of difficult times, and to keep the ungodly to be punished on the day of judgement.  10But most importantly those who indulge in immoral desires and despise government.  They presume to be wise and they’re stubborn and speak against authorities without restraint.

Don’t worry when persecution comes because the Church is refined and grows through persecution.  Even during the Tribulation, the terrible persecution of those who subsequently turned to God will be the seed for many more to become believers and to be saved from the Antichrist’s fate. 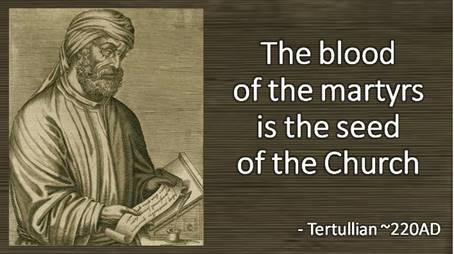 We must always be prepared to meet our maker by being continually clothed in righteousness.

Matthew 24:45 So, who is a faithful and wise servant that the lord has entrusted to manage his household servants – to give them food at the right time?  46That servant is blessed if the master finds him doing so when he comes.

I believe it is futile to prepare for the Tribulation by stockpiling supplies and guns.  When the whole world’s out to get you, only the power of God can save you – just as he did Daniel’s friends in the furnace.